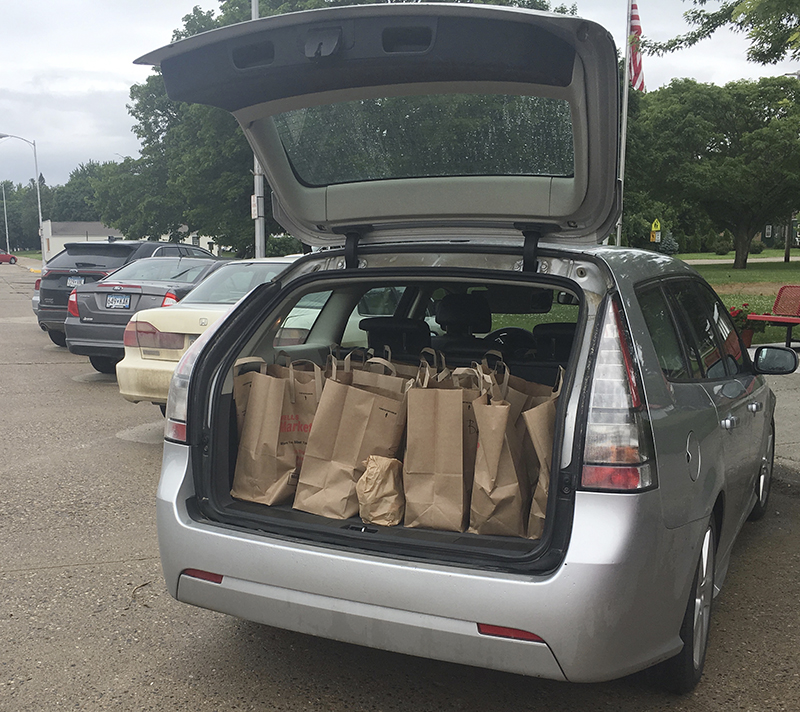 Almost 800 sacks of food were distributed in area communities during the Summer Lunch on Wheels program hosted this summer by the Wells Area Food Shelf. The program is funded through contributions from businesses and individuals in the area. - Provided

Over six tons — 12,362 pounds to be exact — of food were distributed during the 2018 version of Summer Lunch on Wheels, the program developed by the Wells Area Food Shelf last summer and tweaked to include more wholesome food this year, according to a press release.

SLOW’s primary goal is to help feed hungry children in the area during the summer months when school lunch programs are not available.

“We are so grateful to be able to have helped so many kids in our area again this summer,” said Jean Steinhauer, food shelf board president, as final figures were released. “And at the heart of this whole program is our very generous group of donors to the Wells Area Food Shelf, both individuals and businesses. Without them, none of this would have even happened.”

This summer, those in need were first identified through cooperation from the United South Central, Blue Earth Area and Maple River school districts. They distributed SLOW information to their students who qualified for their backpack programs, which offered food for the weekends during the school year. Once the SLOW program started in area communities in June, word of mouth helped drive up the numbers even further.

Families with school-age children were eligible to receive a fully packed sack of groceries every week. In addition, they all received vouchers for a gallon of milk, a dozen eggs and a loaf of bread at local grocery stores weekly. The bags were distributed at the city parks in Bricelyn, Easton, Kiester, Minnesota Lake and Walters, and at the Wells Area Food Shelf inside Good Shepherd Lutheran Church in Wells.

Over the 13-week period, an average of eight children took part in Easton; 49 children in Bricelyn, Kiester and Walters; 21 children in Minnesota Lake; and 55 children in Wells.

The initial SLOW program last year offered lunch sacks on a daily basis in city parks. Because this year’s version centered on well-packed grocery sacks, organizers are certain children ate healthier this summer, according to the release.

A typical week’s sack not only included vouchers for milk, eggs and bread, but also substantial proteins such as hams, meatballs, tuna, peanut butter and hamburger, as well as fresh fruit and vegetables, cereals, yogurt and cheese, tortillas, canned fruit and vegetables, among other items.

Clients of SLOW 2018 also shared their approval of the new program with the all-volunteer staff, who put together the sacks of groceries every Monday at Good Shepherd and then distributed them at parks and Good Shepherd the following day.

“We feel that we made summer a little bit easier for our friends and neighbors in this area who might otherwise have had more difficulty in satisfying their kids’ appetites,” Steinhauer said. “And there’s nothing that could have made Wells Food Shelf organizers happier.”