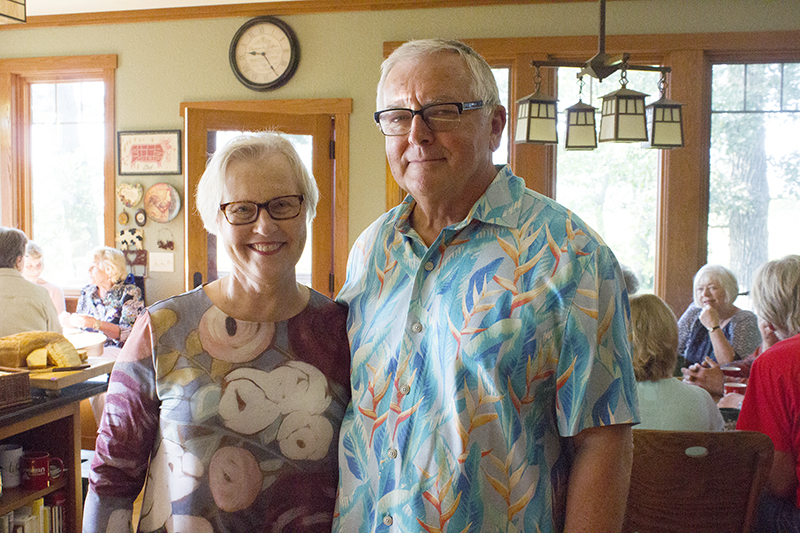 Katherine and Joe Pacovsky own The Czech Inn, a bed and breakfast at 19158 800th Ave. in Hayward. - Sam Wilmes/Albert Lea Tribune

HAYWARD — A bed and breakfast continues to operate and provide local residents with gathering space.

The Czech Inn Bed & Breakfast and Retreat features five guest bedrooms and 18 rooms — sometimes full — that have their own private bathroom, along with common areas such as a dining room, library and large meeting room that can be utilized by guests. Each room has its own theme and is decorated with various antique items.

Along with a comfortable bed, guests who choose to have breakfast at the inn get the treat of being able to dine on the Czech speciality of kolaches every morning, which are served with a gourmet breakfast.

“My husband wanted to live on the farm, and he kept telling me we were moving south, but I thought it was further than this,” she said. “So when I found out we were really going to be on a farm, I told him he needed to build me a bed and breakfast because I thought I was going to die of loneliness out here.”

The facility has hosted tourists from Norway and Japan, including one man whose mother was in the area when an atomic bomb struck Hiroshima, Japan, during World War II. The Czech Inn also sometimes houses people traveling from Chicago to the Black Hills.

“We’ve had all kinds of interesting people,” Katherine Pacovsky said. “We’ve had some political people come.

“We just have some fascinating guests.”

The inn was full Saturday, and four women were quilting in the basement of the inn Wednesday morning.

The Czech Inn hosts community coffee events the second Wednesday of every month, during which coffee and baked goods are served and socialization takes place.

Joe and Katherine Pacovsky try to promote Albert Lea events such as Wind Down Wednesday and the Big Island Rendezvous to their guests as much as possible.

Katherine Pacovsky said they have also promoted local business, such as Crescendo restaurant, which they said Washington, D.C., residents have told them rivals restaurants in their hometown.

“We don’t have a big draw here,” Katherine Pacovsky said. “We try to promote Albert Lea stuff as much as we can.”

The per-room bed and breakfast rate at The Czech Inn is $130 a night plus tax; without breakfast it is $110. Anyone interested in setting reservations can call the inn at 507-373-2477.

Joe Pacovsky is president of the Minnesota Bed and Breakfast Association. His grandfather purchased the property in 1939 and sold it to his son. The couple bought the property when Joe Pacovsky’s uncle died.

Katherine Pacovsky said her favorite part of operating the facility is “visiting with the people.”

“It is kind of important to figure out what they want,” she said, adding The Czech Inn hosted her husband’s class reunion, and typically hosts church groups and will host her nursing reunion.

“We’ve had several groups where they’ll have a family reunion here, or a friend reunion,” Katherine Pacovsky said, adding she believes the atmosphere at the bed and breakfast is a plus.

“It’s really quiet and peaceful, and we have our own beef and pork and chickens,” she said. “So they’re all antibiotic-free — no kind of hormones — and we have flax in the chicken feed, so we have omega-free eggs.”

She said she has enjoyed operating the bed and breakfast.

“It’s just been neat to meet people, people we never would have met any other way,” Katherine Pacovsky said.