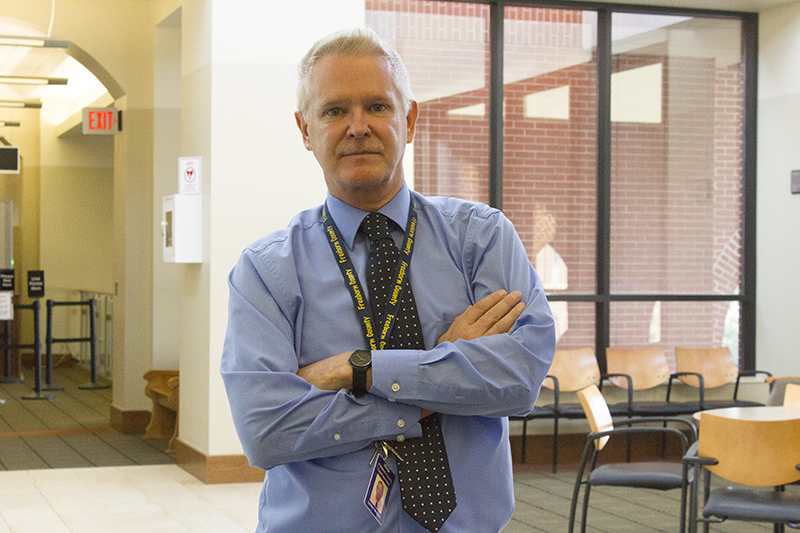 The new director of the Freeborn County Probation and Pre-Trial Services Department operates with an open mindset toward the offenders he supervises.

Stinson said he believes offenders have a chance to improve their lives.

“Everybody that comes in the door has a chance to make a difference in their life,” he said. “I would hope that each offender … that I’ve made an impact on their life in some way, some small way, a positive impact.”

Stinson still works with about 50 low-risk offenders and said he enjoys the variety his job affords.

“I love that every day is different,” he said. “The job is 24/7. We get calls at 3 in the morning, obviously from law enforcement.”

Stinson, 53, has worked in the department for three years and graduated from Winona State University with a Bachelor of Science degree in corrections. He worked for Olmsted County corrections for 10 years and was a Minnesota Department of Corrections Drug Court employee in Wabasha County for one year.

“I have experience in working with all types and levels of offenders,” he said.

Stinson expressed a preference for working in rural communities.

“One of the things I discovered by working in both larger and smaller communities is that I love working in rural probation,” he said. “The people are nice to work with.”

Stinson said his passion involves “working with men and women that have issues with drugs and alcohol.”

“I’m working to create a vision for the department based on the belief that all people have the ability to change their behaviors and improve their lives with the right interventions,” he said. “There is a lot of new information coming out statewide and nationwide on what works and what doesn’t. I’m a believer in evidence-based corrections.”

He spoke of offenders finding intrinsic motivations to improve their lives and finding the proper balance of treating high-risk and low-risk offenders to lower recidivism rates.

Stinson recently had the department’s name changed from Freeborn County Court Services to Freeborn County Probation and Pre-Trial Services “to more accurately reflect to the public what we do.”

Stinson bought and managed a Spanish-language school in Nicaragua — where his partner of 19 years is from — during a separation from corrections from 2007 to 2013.

Stinson spoke highly of the work his predecessor, now-Freeborn County Administrator Thomas Jensen, did in the position, calling working for him “a great experience.”

“He is still mentoring me and is just down the hall when I need help,” he said.

Pre-Trial Services, which employs eight probation officers and two support staff, also operates a domestic abuse program, truancy and diversion programs for juveniles and adults, and a cognitive skills program. The department issues apprehension and detention orders on people who either violate probation conditions or conditions of release or bail.

Stinson called the lack of treatment providers in Freeborn County for chemical dependency and mental health “the biggest challenge for us right now.”

“Mayo Clinic is the only chemical dependency provider in this county, but they have had problems with retaining staff, which has pushed wait times out to a couple of months at times for outpatient admissions,” he said. “There is a need for additional providers in the community. We also get a lot of people with mental health issues. The services — not only locally, but nationally — are very limited.

“Mentally ill people should be getting help that can’t be provided in jail.”

Stinson said a “vast majority of people that come through the door will not return to crime.”

“There’s a certain percentage that are higher risk, and those are the people who we really need to focus our resources on and can make the most impact,” he said.

“He’s initiated some changes that have been positive,” she said. “Tom was a great director for all the years we had him, and missed him when he went, but we were lucky to kind of have a seamless transition with Lyndon.”

Address: Albert Lea during the week, Rochester on weekends

Interesting fact: Stinson bought and managed a Spanish-language school in Nicaragua — where his partner of 19 years is from — during a six-year separation from corrections