A Brooklyn Park man who allegedly strangled someone he knew Saturday in Albert Lea was charged with a felony Monday in Freeborn County District Court. 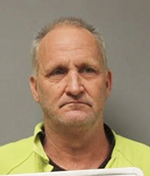 Thomas James Zelenak, 54, is charged with domestic assault by strangulation.

The alleged victim said he and Zelenak were drinking at a nearby bar, and Zelenak asked him multiple times to stop loudly swearing.

The alleged victim then left and called law enforcement. Red marks consistent with being grabbed were observed on his neck.

Court documents state Zelenak admitted grabbing him by the neck.

Judge Ross Leuning released Zelenak on his own recognizance, contingent on him not using or possessing firearms or dangerous weapons, alcohol or controlled substances and following other court requirements.

Zelenak’s next court appearance is scheduled for Oct. 4.