An Albert Lea man is facing a third-degree burglary charge for allegedly breaking into Grace Lutheran Church over the weekend. 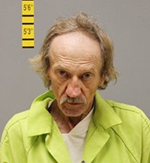 Kavin Earl Whelan, 64, reportedly gained entry into the church by breaking out a window in the kitchen with a large sledgehammer, according to Freeborn County District Court documents.

Albert Lea officers were alerted to the burglary Saturday when one of the workers at the church arrived at the building and found the damage.

In addition to breaking out the window in the kitchen, the burglar also allegedly broke into all of the business office rooms.

Security footage from the church showed a man riding a bike carrying a large sledge hammer. The man went to the area where the window was broken, and once inside the building could be seen on video walking toward the second level carrying the hammer with his hoodie pulled up.

When officers arrived at Whelan’s house, he initially denied being at Grace Lutheran. While speaking to Whelan, an officer noticed a black bicycle matching the one seen in the surveillance video and arrested the man.

In a later interview with an officer, Whelan stated he broke the window into the church and broke into three offices but didn’t take anything. He then panicked and left.

Freeborn County District Court Judge Steve Schwab ordered bail be set at $5,000 with conditions. Whelan must not trespass, must submit to random drug and alcohol testing, and must not leave the state without written court approval.