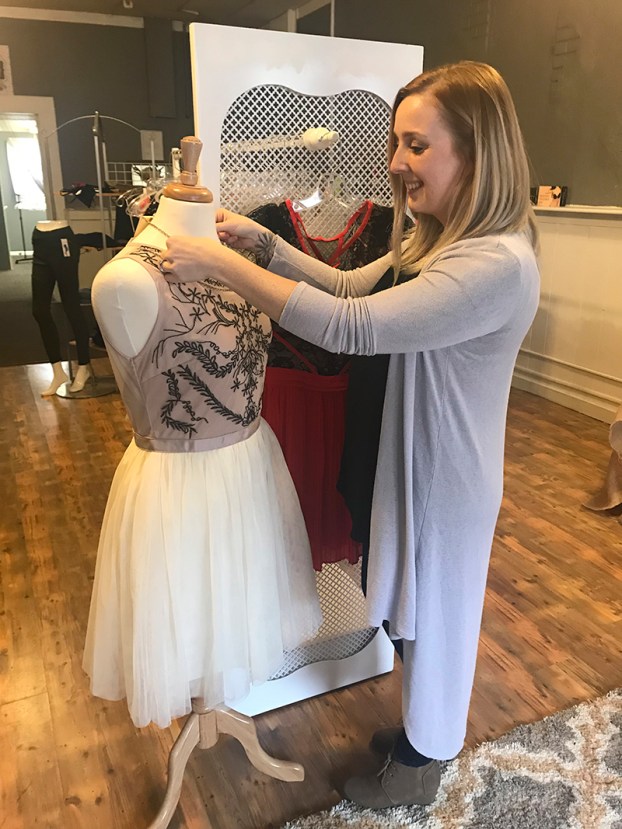 Meaghan Welter works on one of her displays of a formal dress she sells at her store, The Trio Boutique, which opened earlier this month. - Kelly Wassenberg/Albert Lea Tribune

LAKE MILLS — A trio of children have inspired the name of a new Lake Mills business.

Meaghan Welter started her clothing business by going to private parties with a selection of women’s boutique items.

“I have three kids, so at the time, the idea of having a conventional job just wasn’t in the cards for my family,” Welter said.

Many times when she went to parties she was asked, “Where’s the trio at?” So it seemed only fitting when her business grew and she decided to open her own store that she named it The Trio Boutique.

Her primary focus, along with fashion, is the price point and functionality of clothing. Whether dressing up or going for a more relaxed look, Welter said she looks for clothing that will wear and wash well with minimal maintenance.

She carries clothing for women and young ladies ranging in clothing sizes from 4T to 13 for youth and extra small to 3X in women’s sizes.

The idea for including a smaller range of sizes actually came from the private parties she had done in the past.

She said people would frequently bring their daughters to the parties, and at times they would seem like they were bored out of their mind while their moms shopped. She decided to bring a limited selection of girls items with her to see what the response would be. After two parties, she was completely sold out of those items.

Along with having more fun, Welter said she thought the decision gave the girls more time to connect with their moms.

Welter hasn’t abandoned the idea of private parties, though. Customers can schedule times to have the entire store to themselves. The hostess can bring in food and drinks, and the entire party will receive discounts on anything they buy.

Welter still takes her family’s needs into consideration while running her store, which is at 103. N Mill St. Her hours are from 12:30 to 3 p.m. and 4:30 to 6 p.m. Monday, Tuesday, Thursday and Friday, which allows her to be off Wednesdays to pick up her two oldest children from school when her husband trains for the fire department. She is also open from 9 a.m. to 1 p.m. Saturday.

School toilet-papered and other reports