Nicole Marie (Mensing) Oelke, 35, of Blue Earth died peacefully at her home surrounded by her loved ones after a two-year battle with cancer. 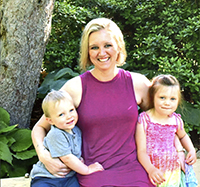 Visitation was from 4 to 7 p.m. Monday at Patton Funeral Home & Cremation Service, 400 E. 14th St. in Blue Earth, and will be one hour prior to the service at the church. Mass of Christian Burial will be at 11 a.m. Tuesday at Sts. Peter and Paul Catholic Church in Blue Earth. The Rev. Peter Klein will officiate. Burial will follow at Calvary Catholic Cemetery in Blue Earth.  Web tributes may be left at www.pattonfh.com.

Nici was born Oct. 13, 1982, the daughter of Mark and Mary (Vosler) Mensing. She was raised in Blue Earth her whole life and graduated high school in 2001. She attended Presentation College nursing program, where she graduated with a Bachelor of Science in nursing. She went on to work for United Hospital District Home Health and Hospice in fall 2012 in Blue Earth. Nici was well respected in her field and enjoyed taking care of her patients to the fullest.

Nici and Bart first met at daycare. Many years later, in fall 2011, they were reunited and then married Oct. 5, 2013, at the Oelke family farm. They have two children, Zoa Marie and Marcus Allen.

Nici loved spending time with family and friends, motorcycle rides with Bart, boating in the summer, bonfires in the fall and sledding with her kids in the winter. There were many things in life that Nici loved, but there wasn’t anything more important to her than her children. She always had fun adventures planned to take them to, whether it was going to the apple orchards, the zoo, the kid’s museum or even just going to the park, the kids loved it and so did Nici.

In lieu of flowers, memorials can be made to Zoa and Marcus Oelke, in care of Bart Oelke, 120 West Circle Drive in Blue Earth, MN 56013.