Peggy L. Bangert, 89, passed away Thursday, Aug. 30, 2018, at Ecumen Pathstone Living in Mankato with family by her side. Memorial services will be at 10 a.m. Sept. 15 at Grace Lutheran Church in Albert Lea. Visitation is one hour before the service at the church. Interment will be in Alden Cemetery. 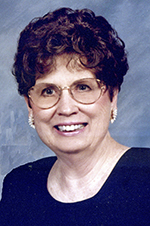 Peggy was born June 23, 1929, on a farm near Kiester to Corald and Wilma Johnson. When Peggy was 5, her family moved to Alden, where Peggy attended school. After high school graduation, Peggy worked for Wilson & Co. in Albert Lea.

On June 6, 1948, she married her high school sweetheart, Melvin R. Bangert, and to this union six children were born.

For several years Peggy worked as a ward clerk at Naeve Hospital in Albert Lea. Surrounded by health care, Peggy’s interest in being a nurse peaked. She began her studies to become a registered nurse in 1973. Upon completion, Peggy continued to work at Naeve Hospital as a registered nurse until she and Melvin moved to Sun City West, Arizona. There, Peggy worked for Del Webb Hospital in the medical psychiatric area.

In 1999, Peggy retired from nursing and she and Melvin returned to Albert Lea. In 2011, the Bangerts moved into an assisted living unit in Mankato. Peggy and Melvin were married for 68 years.

She was preceded her in death by her husband, Melvin; baby daughter, Pamela Jo; grandchild, Josiah; brothers Vernon, Don and Gordon; and sister, Carol Petersen.

Peggy had a passion for playing games and cards — in particular Bridge. She was grateful for the many blessings God bestowed her, especially the joy she received while spending time with family and friends.

Her faith in God was strong and she enjoyed learning about the people and events from the Bible.

Memorials are preferred to Ecumen Pathstone Living or to the donor’s choice.