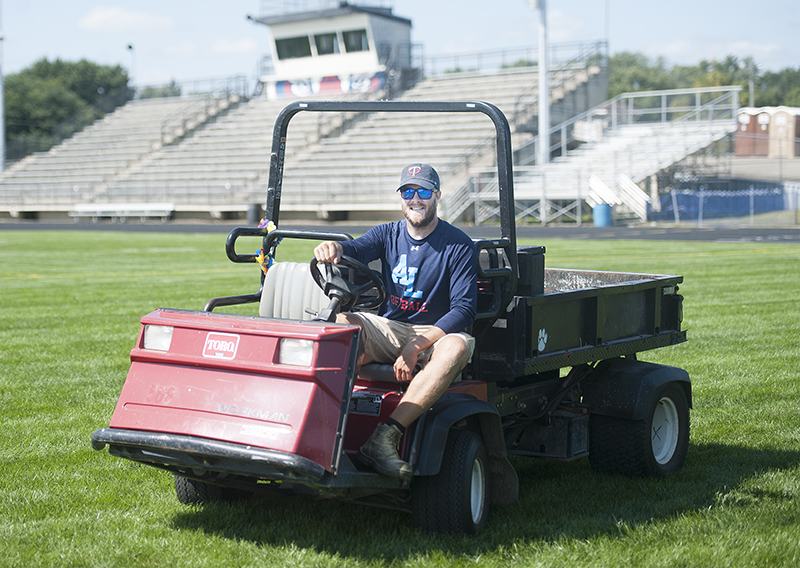 Spencer Dahl has been the grounds manager for the Albert Lea school district since 2014, but has been an employee there since his freshman year of high school in 2002. - Tyler Julson/Albert Lea Tribune

When most people think of a groundskeeper job, they only think of the basic responsibilities, such as mowing the lawns and moving snow. However, Spencer Dahl, an employee on the Albert Lea High School grounds crew since 2002 and current grounds manager, proves there is a lot more to it than that.

Dahl said he first started working for the grounds crew as a freshman in high school as a part-time employee in the summer. He continued to work through college and eventually became the new grounds manager in 2014.

Through nearly 16 years on the job, Dahl talked about what it is that keeps him coming back.

“What kept me interested, for one, is that it’s outside work, which is great,” Dahl said. “But it’s also the work that we did and still do. We make things look pretty and clean. It’s not stuff that everybody notices, but having nicely cut grass and trees, working on the fields and getting to do that kind of stuff is what keeps me into it.”

Dahl said his typical day varies by the season, and there’s always something new to do. Now, in the fall, the crew works nearly all week in preparation to keep the game fields in great shape. The crew mows and repaints the lines as well as pick up any trash left around from the previous games. Nets in the soccer goal must be either taken off or put back on depending on the home event, and pylons and yard markers are set up on game days.

Even in the winter, Dahl said there’s never a slow day.

“It’s a day-by-day thing in the winter,” he said. “You never know when it might snow, and we take care of that, and especially last winter we’re always salting and sanding. Other than that, it’s making things go easier for the next season. I’ve made tool stands and baseball racks. If I’m not doing things like that, then I’m fixing things that are broken.”

This winter, Dahl will spend a lot of his time researching maintenance on the new football stadium that will be finished next fall. He said it’s going to be a lot different not having to mow and repaint the field every week, but there will still be plenty of things to do to prepare for games. He thinks having the artificial turf will make his job slightly easier because he won’t be stressing about the field condition as much.

On top of being the grounds manager, Dahl is an assistant coach on both the girls’ soccer and boys’ basketball teams, something he does for the youth and the love of his hometown.

“I went to school to be a health and (physical education) teacher,” Dahl said. “I knew I was going to miss it if I wasn’t going to be a teacher. With coaching, I get that buzz from working with kids and just seeing them enjoying the game and being successful. It’s also the competitive bug that I have for Albert Lea. I wouldn’t want to go anywhere else and coach, I want Albert Lea to succeed.”

Interesting fact: ranging in a variety of designs, Dahl estimates he has over 60 different baseball caps