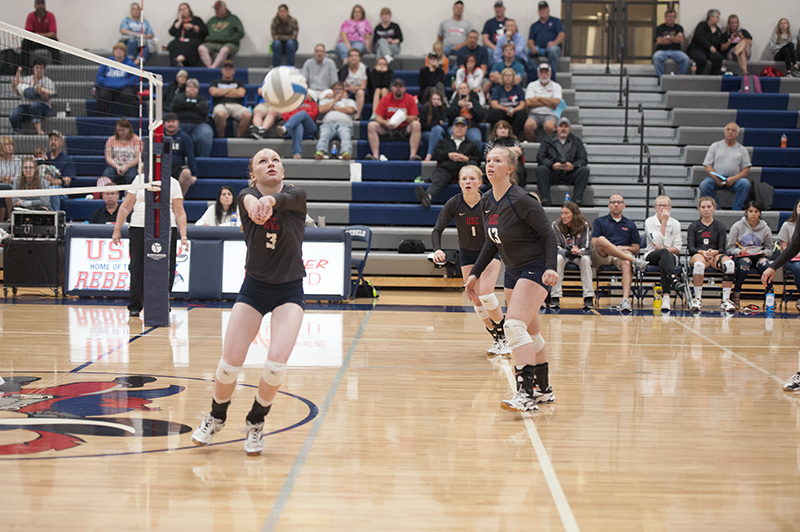 United South Central senior Kourtney Harpestad bumps the ball up to one of her teammates to record the kill Tuesday night against Janesville-Waldorf-Pemberton. Harpestad recorded 21 assists in the five-set win. - Tyler Julson/Albert Lea Tribune

WELLS — The United South Central volleyball team hosted Janesville-Waldorf-Pemberton Tuesday night, with both teams looking for their first victory of the year.

Despite losing the first set by a wide margin, the Rebels found their footing and rallied to beat the Bulldogs in five sets, 3-2.

It seemed like it was going to be a long night for the Rebels through the first set. Plagued by miscommunication errors, the team struggled to gain any sort of momentum, losing the first set 25-10.

The second set would play much closer, as the Rebels were never more than three points away from the Bulldogs, until they took the lead for themselves midway through the set. They were sparked by some spectacular digs by freshman Melany Ehlert and stellar net play by senior Lizzy Baird. 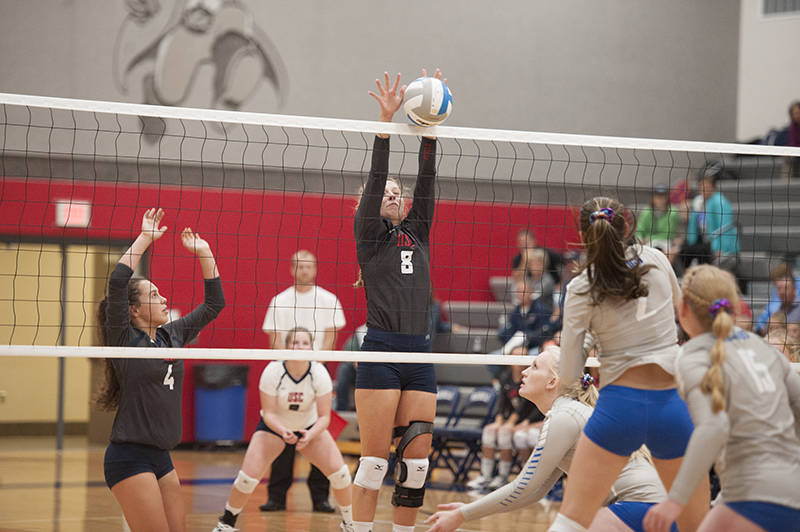 The set was knotted at 20 points each, until United South Central was able to pull away and win the set, 25-23.

The third set seemed as though it was going to go in the Bulldogs’ favor when they jumped out to an early lead and took a 20-15 advantage. However, the Rebels weren’t ready to give up just yet, as they came back — going on a 10-3 rally to win the set 25-23.

Leading the game two sets to one, the Rebels needed just one more set to put the Bulldogs away. It wouldn’t be the fourth set, however, as the Bulldogs won it quite heavily. The Rebels did make a bit of a comeback late, but it wasn’t enough to dig themselves out of the hole they were in, losing the set 25-16.

It would all come down to the fifth and final set, which saw the Rebels find a groove and cruise to the win. Despite giving up the first point, the Rebels fought back to take a 9-3 lead before the Bulldogs called a timeout to regroup. The timeout proved to be ineffective, as the Rebels rode that momentum to the end — winning the final set 15-7.

Baird ended the night with 13 kills, four digs and four aces. Senior Kourtney Harpestad led the team with 21 assists, while also tacking on one kill herself.

The Rebels climb to 1-1 on the season and will be back on the court Thursday when they travel to Blooming Prairie.