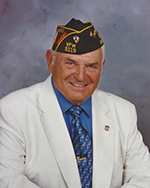 A Mass of Christian burial will be at 10 a.m. Friday at St. John Neumann Catholic Church, 4030 Pilot Knob Road in Eagan. Visitation is one hour prior to the Mass at the church. Interment will be in Fort Snelling National Cemetery.

Dick served in the Navy from 1944 to 1946. He graduated from Indiana Institute of Technology as a civil engineer and worked for Hennepin County as a construction engineer for 30 years prior to his retirement.

He was a member of the American Legion, Veterans of Foreign Wars and Knights of Columbus. Dick greatly enjoyed living on Lake Minnetonka prior to his retirement and in Cocoa Beach, Florida.

He was preceded in death by his parents Frank and Ruth Spellman; and brother, Tom Spellman. He is survived by his wife of 65 years, Mary Rita; daughters Kathy (David) Bollig of Lakeville and Maureen (Steve) Jensen of Woodbury; and grandchildren Kristin (Guy) Willeford, Sean Jensen and Erin Bollig.

His family would like to extend a special thank you to the caring staff at The Rosemount and Brighten Hospice for care given to Dick.

Memorials are preferred to the donor’s choice.