Memorial services for Robert “Bobbie” Pleiss of Albert Lea will be at 11 a.m. Monday at Grace Lutheran Church in Albert Lea. The Rev. Jennifer Gonsalves will officiate. Visitation will be from 2 to 4 p.m. Sunday at Bonnerup Funeral Service and one hour prior to the service at the church. Interment will be in Fort Snelling National Cemetery in Minneapolis. Military honors will be accorded by the Albert Lea area veterans groups. 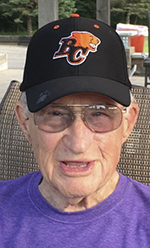 Robert was born July 7, 1921, in Albert Lea, the son Bernard M. and Doris E. (Cooper) Pleiss. He graduated from Albert Lea High School and received his master’s degree in mathematics from Luther College in 1948.

Robert was united in marriage to Ruth Thompson on Dec. 31, 1950, in Parker, South Dakota. Robert taught school in Westbrook before returning to Albert Lea, where he was an industrial engineer for Wilson & Co. for over 36 years. He was an active member of Grace Lutheran Church. He served on the church council, sang in the choir, taught Sunday school for 25 years and was part of the Bethel Bible study.

Robert was a member of the Albert Lea Eagle’s club, Sons of Norway, Disabled American Veterans, Veterans of Foreign Wars, American Legion — where he was a past president, YMCA, Y’s Men’s Club, the Albert Lea Kiwanis and a volunteer for RSVP. He loved camping, reading about American history, woodworking and was an armchair theologian.

Robert enjoyed exercising and walking, and sang with the Albert Lea Cariarries for over 20 years, where he made many good friends.