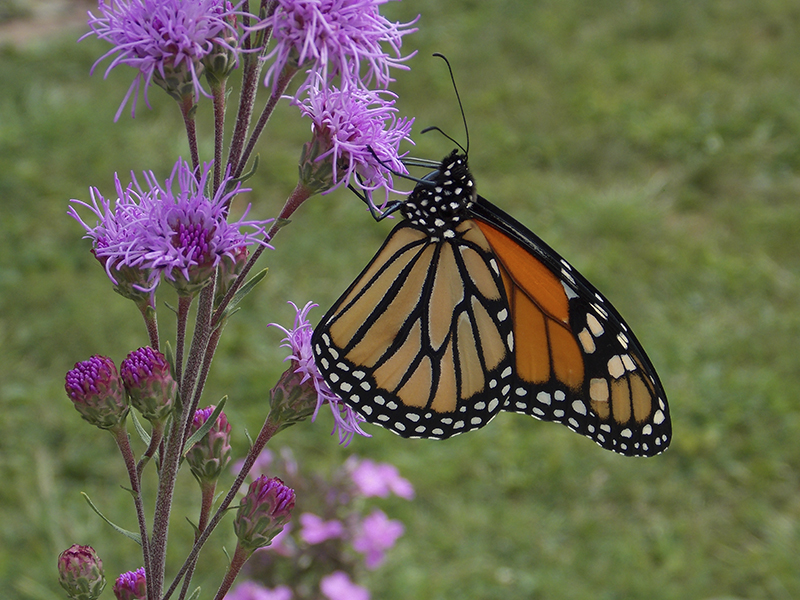 Carol Hegel Lang is a green thumb residing in Albert Lea. Her column appears biweekly. Email her at carolhegellang@gmail.com.

It is hard to believe that we have entered the month of September already and the gardens are on their downward swing. To me, the month of September is magic in the gardens. Monarchs are doing their final breeding and the ones that are born now will be migrating to Mexico during this month. This morning I found another caterpillar, and as it fattens up it will spin a chrysalis and then turn into a butterfly. Talk about magic! The long trip to Mexico is incredible when you think of these small creatures flying around 3,000 miles on their instinct alone, as they have never been there before.

Another creature that is busy feeding and fattening up is the hummingbird, who will also migrate to southern parts of the United States and Mexico. Hopefully you already have your sugar water feeders up and filled for them. The males leave first around the end of August and then near October the females and young hummers will start their migration.

The gardens are full of activity as I watch them fly from flower to flower seeking nectar while the goldfinch are eating seeds on the sunflowers. My late blooming flowers are a mega source of nectar for these birds and butterflies as they provide food for all of them.

For years now I have talked about the reasons we need to plant milkweed for the monarchs and dill, parsley and fennel for the swallowtails, as these plants are the only place they lay their eggs, and the caterpillars have a food source. But as summer goes on, these butterflies also need sources of nectar. As fall approaches, this is especially important as a food source for them. Marigolds, zinnias, cosmos, phlox, Joe-pye weed, salvia, lantana and many native plants will be what they need to fulfill this hunger.

In the garden along the driveway, I have two kinds of cosmos and black and blue salvia as well as malva — also called miniature hollyhock by many people, a native salvia, phlox, coneflowers, rudbeckia, kiss-me-over the garden gate, sunflowers, Victoria blue salvia and zinnias blooming now. All of these are food sources and every time I look out the window the garden is filled with activity.

A man stopped by in May and talked to me about the gardens and wanted to know if I would be interested in some canna lily bulbs, as he had several sacks full of them he would like to share. Of course I was delighted to take some of them off his hands.

In the front garden, I planted three of them and another one in a whiskey barrel, while the rest went into the gardens in the backyard. What a joy it has been to watch hummingbirds circle through the gardens to find them, and they are still blooming now that we are entering fall in the gardens.

Like I have said, there is definitely magic in the gardens right now.

The native salvia I planted this spring on the eastern end of the pollinator garden has had the hummingbirds really loving them. Next year I will have to find a way to stake them up as they are around 4 feet tall and have a tendency to flop over, but are they ever lovely.

The sphinx moths — or hummingbird moths, as many call them — have also been enjoying all the nectar plants in the gardens. Those little critters sure do whiz around into the early hours of evening from early morning. The cooler and wetter temperatures have brightened the colors of the flowers parched by the August heat and winds.

My begonias have sure been the stars of the gardens this year, along with the lantana. Morning glories have climbed to the top of the windmill, adding a touch of color to a rusty piece of metal. The Bounce impatiens have been so colorful too.

“O, money can’t buy the delights of the glen, nor poetry sing all its charms: there’s a solace and calm ne’er described by the pen when we’re folded within nature’s arms.” — James Rigg