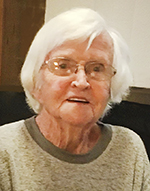 On April 23, 1950, Syrlene was united in marriage to Donald Williamson at St. Olaf Church in Austin.  Together they had five children. Don passed away June 16, 2007.

After being married, Syrlene attended beauty school at Austin Vo-Tech. She worked as a beautician in her home and then later at Comforcare as a nurse’s aide and hairdresser for 27 years.

Syrlene enjoyed visits to the Black Hills and Colorado, as well as trips up north fishing. She was an excellent cook and enjoyed baking. A skilled seamstress, Syrlene sewed her children’s clothes when they were younger. In later years, she treasured her time caring for the grandchildren. Syrlene was a faithful member of Our Savior’s Lutheran Church in Austin, where she was active in Bible study. She was a devoted wife, mother, grandmother and great-grandmother, and will be dearly missed.

Funeral services will be at 2 p.m. Monday at Our Savior’s Lutheran Church in Austin with the Rev. Karen Behling officiating. Visitation will be from noon to 2 p.m. at the church, immediately preceding the service. Interment will be in Red Oak Grove Lutheran Cemetery in rural Austin.  In lieu of flowers, memorials can be directed to the Williamson family. Services have been prearranged and will be performed by Worlein Funeral Home of Austin. Condolences may be expressed to the family online at www.worlein.com.