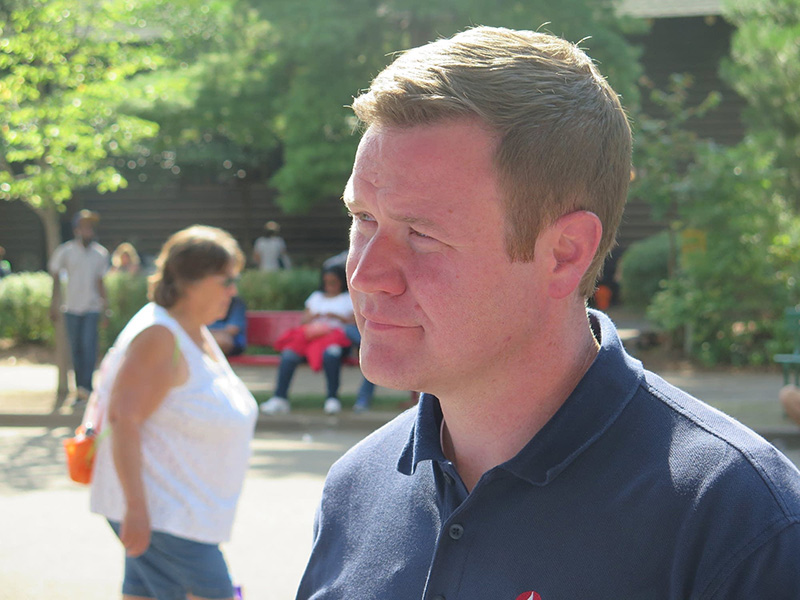 Doug Wardlow talking to a supporter at the Minnesota State Fair on Wednesday. Tim Pugmire/MPR News

The two major-party candidates for Minnesota attorney general have been jabbing at each other since the primary election with each trying to paint the other as too extreme to be the state’s top law enforcement official.

But with some nine weeks to go until Election Day, the rhetoric is sharpening quickly between DFLer Keith Ellison and Republican Doug Wardlow.

“We’re bringing to light certain things about Keith Ellison that are troubling, that the voters of Minnesota need to know about,” Wardlow said at his Minnesota State Fair booth, where he’s been talking to potential voters about his plans for the attorney general’s office. He is also talking about Ellison. “That’s all we’re doing, just dealing in facts and being very straightforward.”

Wardlow has been criticizing Ellison for having a lapsed law license. He contends Ellison holds dangerous views on immigration. He believes Ellison would use the office to “wage political war” against the Trump administration.

And Wardlow said the DFL’s post-primary endorsement of Ellison was disturbing, given the allegations of domestic abuse made by Ellison’s former girlfriend.

“All I know is that the allegations are very troubling, very serious,” said Wardlow. “And I think it makes it difficult for him to make the case that he should be the state’s top law enforcement office. I’m focusing on my message, which is I am going to take the politics out of the office, I’m going to stand up for the rule of law, enforce the laws and do the work of the office of the attorney general for the people of Minnesota.”

Ellison has repeatedly denied the allegations.

“I have said that I haven’t done what my ex-partner said. I’ve been very clear about that,” said Ellison.

During a stop at a Minneapolis coffee shop, Ellison said he’s willing to discuss the allegations with voters if they’re interested but that he prefers to focus on health care access, fair lending practices and other consumer protections.

On the matter of his law license, Ellison called it a “non-issue.” He voluntarily put his license on inactive status when he began serving in Congress. He said he’s on track to have it fully active again by the end of the year.

“We have enough policy differences to debate. Trying to turn this into a thing of personality, I think, is an unfortunate diversion,” Ellison said. “But I’m going to keep it focused on the issues at play.”

Ellison and his campaign have taken plenty of shots at Wardlow. They accuse him of being anti-LGBT and anti-marriage equality because of his job as a lawyer with the Alliance Defending Freedom. That’s the group that defended a Colorado baker who wouldn’t sell a wedding cake to a same-sex couple.

“I think that is morally wrong,” said Ellison. “As attorney general I’ll stand up for liberty and justice for all, which is a very simple American concept, but I think needs defending, particularly in moments like this.”

Wardlow said the Alliance Defending Freedom fights for freedom of speech and religion, and he’s proud of the work he did there. He stressed that as attorney general, he will enforce the law.

“I’m not anti-LGBT or anti-transgender. And those issues are not relevant to the office of attorney general,” Wardlow said. “I will be defending and fighting for the legal rights of every single Minnesotan, whether LGBT, transgender or not.”

If the race is close it would be unusual. A Republican hasn’t won the office in five decades. But political observers are taking note of the escalating rhetoric.

“The nastiness that’s starting to emerge reflects that fact that it’s going to be a very competitive, very tight race,” said David Schultz, a political science professor at Hamline University who said national influences are at play in Minnesota. Schultz said Ellison and Wardlow are polarizing candidates, running for an office that has become increasingly politicized throughout the country.

“What we’ve seen over the last decade is state attorney generals on both the Republican and Democratic side suing the United States government on issues such as immigration or on guns or on issues such as environmental policy,” said Schultz.