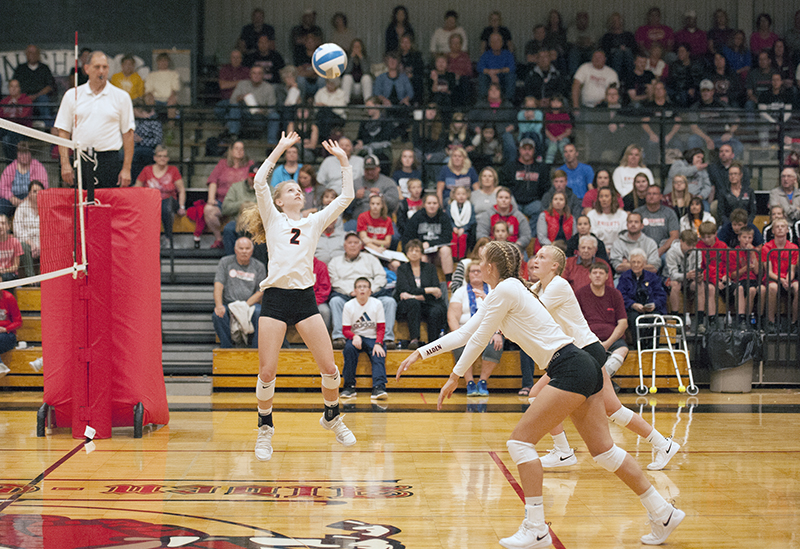 Alden-Conger senior Erika Bute sets the ball to one of her teammates in the first set against St. Clair Tuesday night. The Knights won the match three sets to one. - Tyler Julson/Albert Lea Tribune

ALDEN — The Alden-Conger volleyball team hoped to remain unbeaten Tuesday night when it hosted a hungry St. Clair team that was looking for an upset.

Although they dropped one set to the Cyclones, the Knights hit the spots they needed to hang on and win an energy-filled match, 3-1.

The first set saw a few miscues from the Knights right away. However, seniors Erika Bute and Megan Linn took control of the game with some great work from the service line to keep the Knights in it. The set was close until very late, when the Knights seemed like they were going to pull away, getting out to a four-point 20-16 lead. The Cyclones used some big hits from the front row to climb back in it, but it was the Knights who came out on top, 25-22. 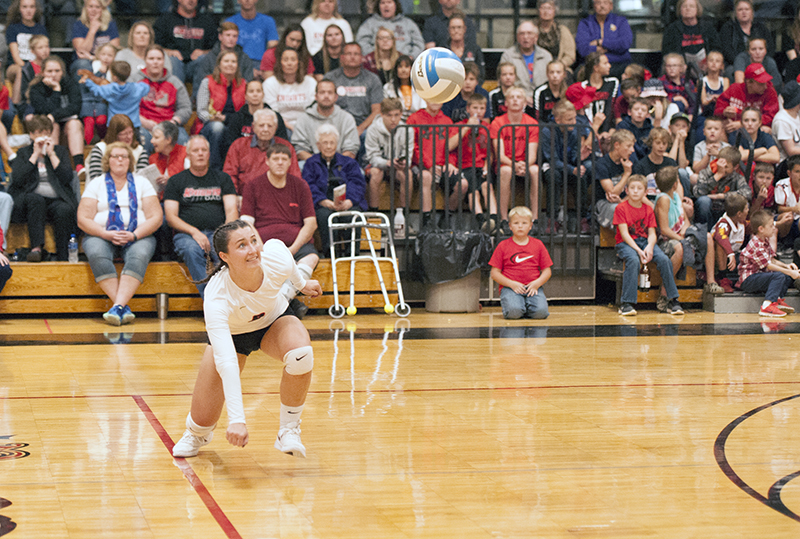 Alden-Conger senior Megan Linn drops down to try and save the ball Tuesday night against St. Clair. The Knights won the first two sets, dropped the third and took the fourth to win the match. – Tyler Julson/Albert Lea Tribune

Alden-Conger came out to a very slow start in the second set. St. Clair clung to a lead all the way through the set before Alden-Conger tied it at 18-18. Solid net work from senior Autumn Soost and junior Mikenna Erickson kept Alden-Conger in the set, and a big kill from Erickson gave the team the edge to win a close second set, 26-24.

The Knights rode that wave of momentum into the third set, jumping out to 7-1. It seemed as though they were poised to win the third set in dominating fashion. However, the Cyclones weren’t ready to quit yet, as they battled back into the set. The Cyclones trailed the entire set until the game-deciding points, taking the third set from the Knights 26-24.

The fourth set got off to a very similar start as the third. Alden-Conger got out to an early advantage again, this time leading 16-5. St.Clair tried to rally back into the match, but the gap was too wide to overcome, dropping the fourth and final set 25-16.

The Knights improve to 11-0 on the season and remain unbeaten. Their next match is scheduled for Thursday at Martin County West against the 3-9 Mavericks. 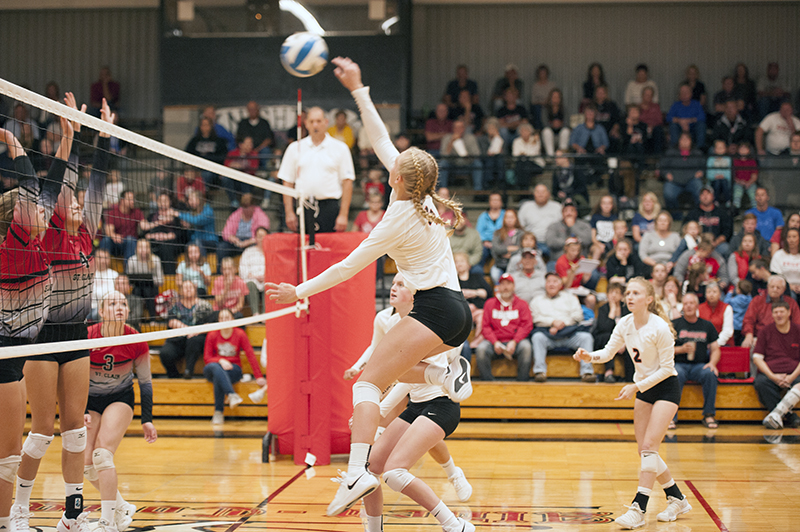 Alden-Conger sophomore Abbie Theusch hammers down one of her many kills Tuesday night against St. Clair. – Tyler Julson/Albert Lea Tribune