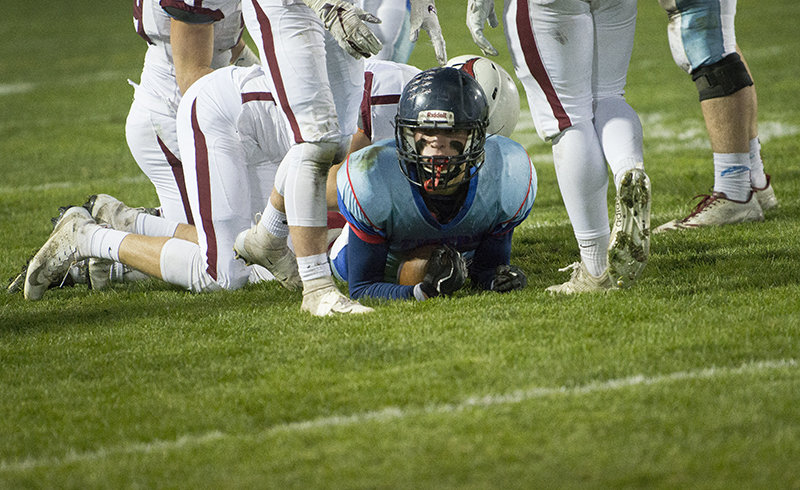 Albert Lea's Carter Simon looks to his coaches after being brought down on a carry Friday against Fairmont during the Tigers' Homecoming game. - Colleen Harrison/Albert Lea Tribune

Tigers fans packed the stands Friday night to show their support for the football team as they wrapped up Homecoming week with a game against Fairmont.

Despite forcing three turnovers throughout the game, the Tigers came up just short of the Cardinals, 29-22.

The Tigers took the ball to start the game and after a couple runs from junior JJ Mucha Owens that were close to breaking for a big gain, they were forced to punt. The Cardinals and Tigers traded three-and-outs, until junior Braden Kraft made a big defensive play by intercepting a Cardinals pass — returning it all the way to their 30-yard line. 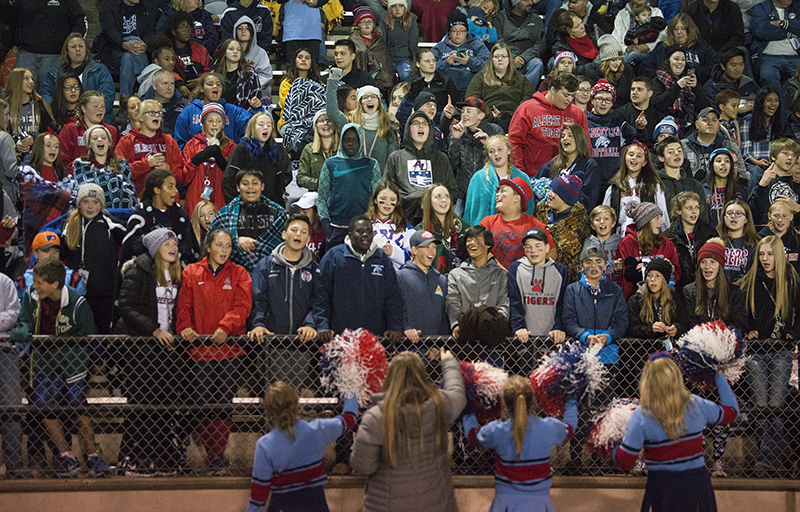 Albert Lea didn’t let the tremendous opportunity slip through its fingers, as senior Cole Wentzel took the ball into the endzone a few plays later on a 13-yard run. After a successful PAT from junior Ismael Cabezas, Albert Lea took a 7-0 lead to the end of the first quarter.

The Cardinals scored shortly into the second quarter after a drive that stalled out from the Tigers. The touchdown came on a one-yard quarterback sneak and a successful kick led to the Cardinals tying the game at 7-7.

A mistake on their next offensive possession would cost the Tigers in a big way. During a punt attempt, the snap sailed over the punters head and was picked up at the 7-yard line. An attempt to advance the ball resulted in little gain, giving the ball to the Cardinals in favorable field position. 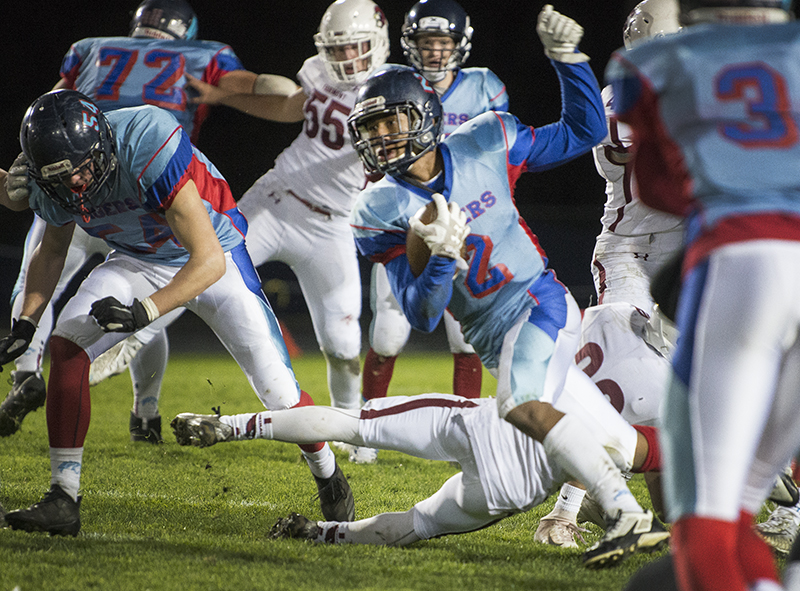 Fairmont scored on the next play with a 7-yard rush, but a missed PAT left the score at 13-7 in favor of Fairmont.

The Cardinals added to the lead after another punt from the Tigers. The score came on a deep 44-yard pass into the endzone.

Albert Lea got the ball back with little time left in the half, when senior Dane Brownlow recovered a fumble in Fairmont territory.

Again the Tigers made the most off a Cardinals turnover, with Wentzel catching a 28-yard pass from junior Logan Howe and took it into the endzone. Wentzel also took a short run across the plane to convert on the two-point conversion, making the score 20-15 as the teams went into halftime.

Albert Lea came out in the second half and continued big plays on defense by forcing another fumble that was picked up by Brownlow. However, a costly penalty moved the Tigers deep into their own territory, and another high snap on a punt sent the ball out of the endzone for a Tigers safety. 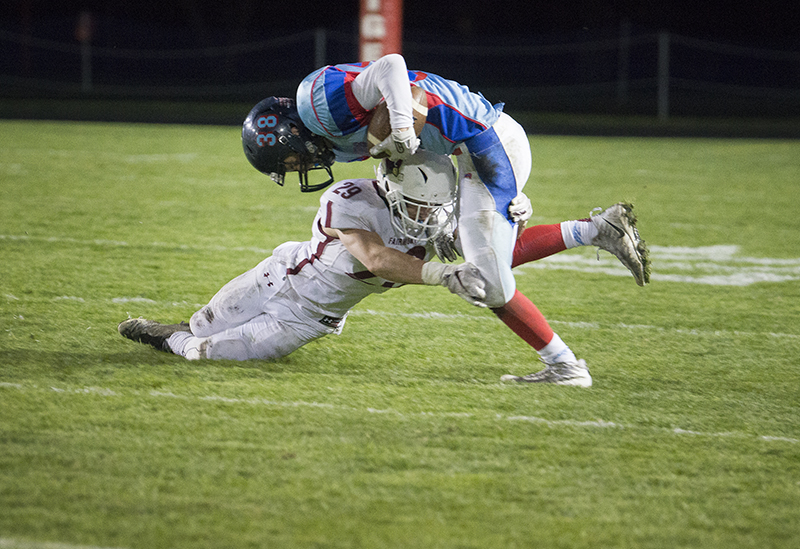 The Tigers forced three turnovers, two of which led to points, however, they also gave up two turnovers on punts that both led to points for the Cardinals.

“That’s the game,” said head coach Corey Black. “It came down to two plays. We gave up nine points with turnovers on punts that went awry. If we fix those mistakes, this game is in our hands completely. It’s just another thing for us to go back and look at and get better at.”

The Tigers forced a punt to take the ball back and scored on that possession to tie the game, once again, at 22-22. The score came on a break away 25-yard run to the outside from Mucha-Owens. 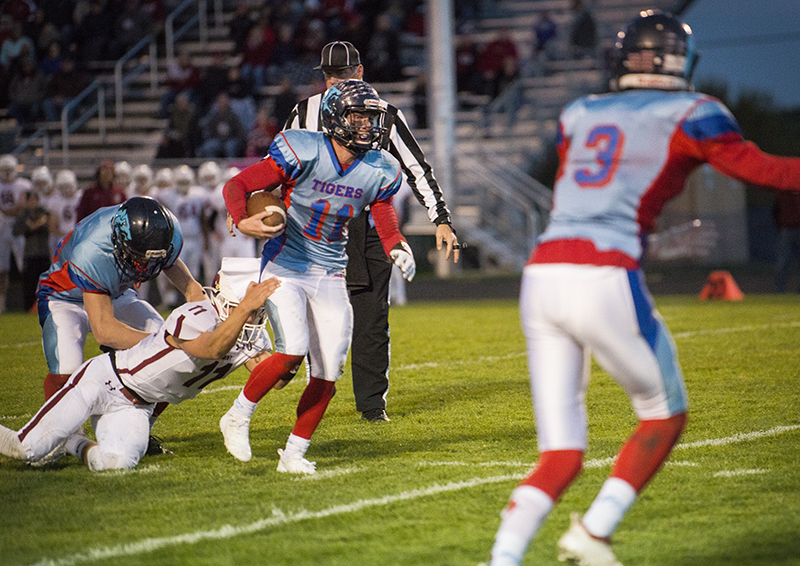 After both teams traded punts back and forth, the Cardinals connected on a deep shot downfield, putting the ball at the two-yard line. They punched the ball in on the next play to take a 29-22 lead with just over three minutes remaining.

Albert Lea’s hopes of a comeback would be dashed after a leaping one-handed interception by the Cardinals gave them the ball where they would run the clock out.

“We feel a lot better this Friday than we did last Friday,” Black said. “Next Friday were going to feel even better. We just have to keep on the positive incline and trust the process in everything we do, so we can be sure that when our time comes we’ll be ready to go.”

The Tigers fall to 0-5 on the season and play again Friday when they travel to play Tri-City United. 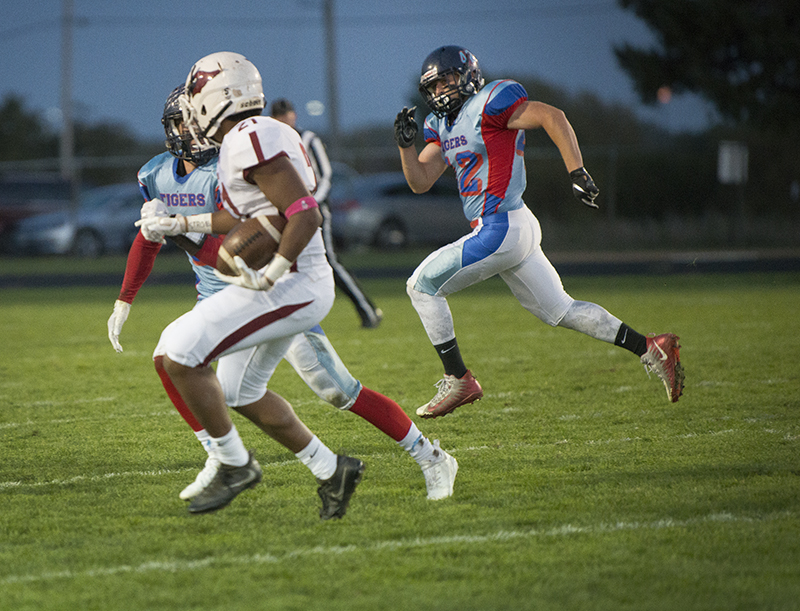