Tigers strong through 3, but ultimately fall to Hubmen 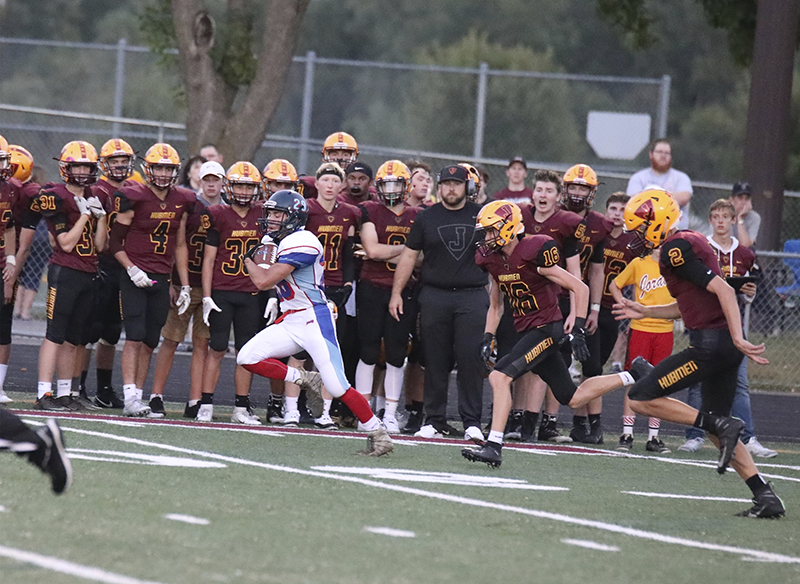 Albert Lea junior Braden Kraft runs along the sideline after recovering a fumble Friday night against Jordan. The Tigers lost the game to the Hubmen after not allowing a point through three and a half quarters. - Provided

The Albert Lea football team headed to Jordan Friday night looking to bounce back after a tough loss last Friday at home.

The Tigers played 3 1/2 quarters of solid defensive football, but in the end were unable to hold off the Hubmen, falling 30-13.

Albert Lea was first on the board after a 55-yard scamper from junior JJ Mucha Owens. The team was able to hold onto that lead throughout the entire first half, not allowing Jordan to find the endzone at all.

It was the same result in the third quarter, as the Tigers defense held strong and played lights out to keep the Hubmen away from the endzone.

Unfortunately for the Tigers, they were unable to hold the Hubmen in the fourth quarter. The Tigers turned the ball over three times in the final quarter and allowed the Humen to capitalize on each one.

Albert Lea was unable to match the late rally from Jordan, ultimately dropping the heartbreaker.

“Our defense played outstanding tonight,” said head coach Corey Black. “They held one of the best defenses in 3A to zero points for three and a half quarters. We were just unable to come up with the big play when we needed to and turnovers ended up killing us. I’m proud of the way we came out and played aggressive from the start. We started playing to win instead of playing not to lose.”

The Tigers fall to 0-3 on the season and will be back in action Friday against the Bluejays of Waseca in their second home game of the season.