‘Where is the bravery in this room?’: Klobuchar slams GOP, Kavanaugh 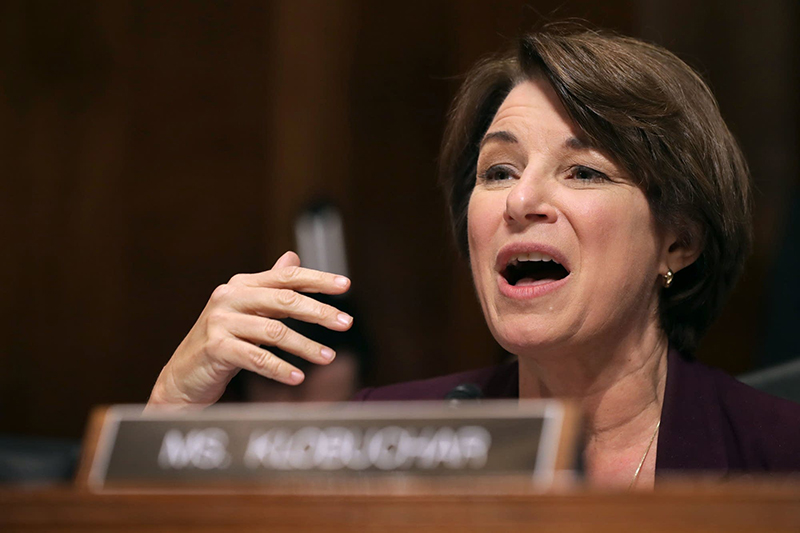 “Where is the bravery in this room?” she asked the Senate Judiciary Committee as it moved Kavanaugh’s confirmation to the full Senate.

Klobuchar, a Democrat, reiterated her belief that the FBI should investigate Kavanaugh before any vote to confirm him to the Supreme Court. Ford, now a university professor, said a drunken Kavanaugh locked her in a room and groped her while covering her mouth while the two were at a high school party in 1982.

Most Republicans and Kavanaugh hadn’t called for an FBI investigation, a move Klobuchar said was motivated by fear.

“They’re afraid of what they’re going to find out,” she said.

After Klobuchar made her remarks to the committee, President Trump ordered a new FBI investigation of Kavanaugh that would be “limited in scope” and last no longer than a week, the Associated Press reported.

Klobuchar’s comments came before Arizona GOP Sen. Jeff Flake decided he’d vote in favor of Kavanaugh’s nomination. But his vote came with a caveat: He asked for the nomination to be delayed on the Senate floor by one week in order to ask for an FBI investigation.

The push for an FBI probe into Ford’s allegations and those of two other women has been a key focus for Klobuchar and her Democratic colleagues.

On Friday, she suggested Republicans were forcing Kavanaugh’s confirmation, against the will of the public.

“The Constitution does not say, ‘We the ruling party.’ The Constitution says, ‘We the people,’” she said. “And if the people of this country want a check and balance in the Supreme Court, a check and balance on this administration, if they want to have a fair process, they’re the only ones left to pitch in here. They’re the only ones left to have a say.”

Kavanaugh has denied any assault took place. He and Ford testified before a Senate committee on Thursday.

Klobuchar was among the senators questioning the two. She said Kavanaugh deflected questions and on Friday noted an exchange in which Kavanaugh turned a question about his drinking back to the senator.

She asked Kavanaugh if he ever would drink to the point of blacking out. Klobuchar said she asked the question in an attempt to find facts about the night of the alleged assault.

“What did I get in response? A question of if I black out,” Klobuchar said on Friday, noting Kavanaugh later apologized to her.

Klobuchar is a former prosecutor. She noted statements made to a medical professional are considered to be credible in considering evidence.

Before Ford took her allegation against Kavanaugh to the public, she told her therapist in a session years ago he had assaulted her when the two were teenagers.

Klobuchar said Ford’s statement to her therapist is crucial and appeared to suggest Ford’s testimony was more credible than Kavanaugh’s. Her reason: Kavanaugh has the opportunity of a lifetime at stake; Ford had wanted to keep her story private.

“In cases where you compare evidence you look at what their goals are. What would be their reasons to lie. And I look at you have on one hand a judge who (has) a career-making moment to get on the United States Supreme Court. And by the way, no one is entitled to be on the United States Supreme Court. And then you have a woman who tried to keep this confidential. Who came forward, sent a letter, tried to do what she could to keep her name out of the news. And finally, when the reporters showed up at her door she came forward. I just see these as different. And when you look at the rules of evidence, when you look at credibility, the fact that she had mentioned this before means a lot.”