Wilma Johnston, 106, died peacefully Sunday, Sept. 2, 2018, at St. John’s Lutheran Community in Albert Lea. A memorial service will be at 2 p.m. Friday at First Presbyterian Church. The Rev. Dwight Netzer will officiate. Visitation will be one hour prior to the memorial service at the church. 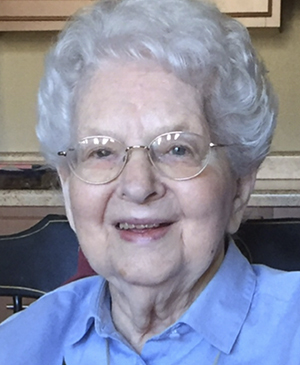 Wilma was born July 6, 1912, in Ray County, Missouri, the daughter of J. Irvin and Mable Wall Maddux. Wilma was a graduate of Richmond Missouri High School, attended Kansas City Teachers College and was a graduate of the Sherashon-Hooley Business College in Kansas City, Missouri. After graduation from college, she returned to Ray County to teach in a one-room schoolhouse for two years, where she started her own hot lunch program. After lighting a fire in the old pot belly stove, she would start a pot of vegetable soup, which she placed on the back of the stove for herself and her students. During the summer, she organized new chapters of Beta Sigma Phi sorority in several northern Missouri towns.

In 1934, when Federal Soil Conservation program was established, she left her teaching position to move to Bethany, Missouri, to become a secretary in the Midwestern regional office. She was later transferred to an office in Columbia, Missouri, and in 1938, she joined the staff of the Callaway County Soil Conservation service office in Fulton, Missouri. She was also assistant to the registrar at William Woods College in later years.

Wilma was a 50-year member of the PEO Chapter DY and the Fulton Study Club and served as president of both organizations. She also served as a Boy Scout and Girl Scout leader, taught Sunday school and sang in the choir of Fulton Christian Church. She was an avid bridge player and a flower gardener.

Wilma celebrated her 106th birthday this July with her family and friends and enjoyed the day very much.

Her ashes will be interred with her husband’s in Fulton.

Memorials are preferred to the First Presbyterian Church or Mayo Clinic Health SystemHospice.