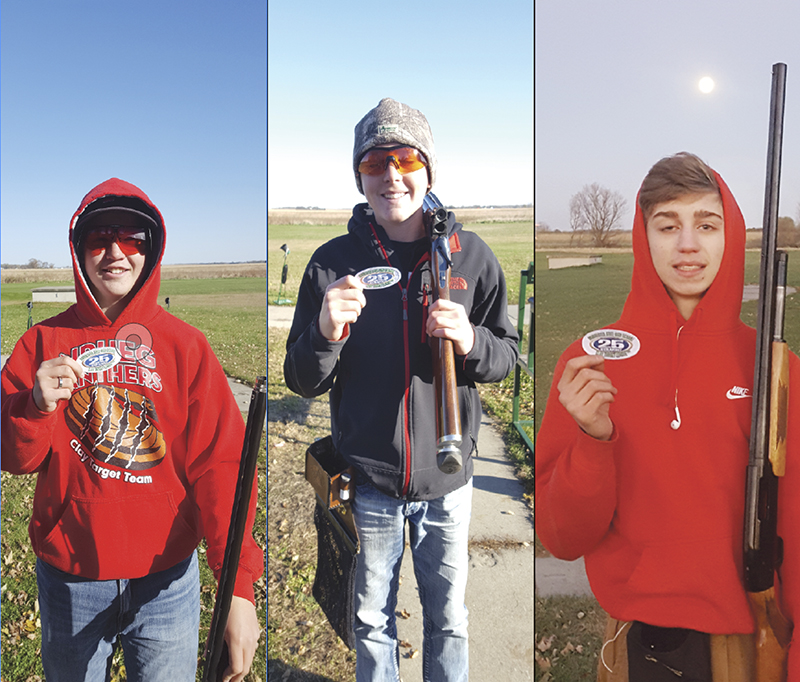 From left, Caden Beauvais, Alex Dobberstein and Tristian Simon each shot 25 straight as they led the NRHEG Panthers to the end of the fall clay target shooting league. - Provided

Caden Beauvais, Alex Dobberstein and Tristian Simon each shot 25 straight as they led the NRHEG Panthers to the end of the fall clay target shooting league, according to a press release. Simon led all shooters with a 49 out of 50 possible targets.

The team, which spent the whole season chasing the third-place team from Blaine, was unsuccessful in a final bid to take over the third-place spot. Its fourth-place finish is NRHEG’s lowest since 2012, but as head coach Dan Sorum shared, it’s not necessarily a bad thing.

“The team of over half athletes that are freshman or younger saw continuous improvement,” Sorum said. “Many of the youngest shooters have excellent form, which will come through as they gain experience.”

Four shooters finished the season in the conference’s top 25 averages. Caden Beauvais was the team leader with a per round average of 23.6. Alex Dobberstien averaged 22.9, Clay Stenzel averaged 22.7 and Joey Brein finished with a 22.5 average.  Both Dobberstein and Beauvais also finished in the state’s top 100 shooters out of the league’s 3,223 athletes.

The team expects to hand out 21 letters for the team of 49 athletes at its fall awards banquet.  With the season now over, the team will look toward the spring league, where it will attempt to defend last spring’s conference win.