Man missing from Mason City could be in Minnesota

MASON CITY — The Mason City Police Department is asking for assistance in locating a missing 27-year-old man from Mason City. 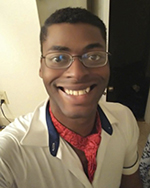 Alonzo Higgins was last seen by his family around Oct. 1, and police are concerned he may have a medical condition.

Police know Higgins got on a Minneapolis-bound Jefferson bus in Mason City before 8 a.m. Oct. 1, according to Mason City Police Capt. Mike McKelvey, but don’t know what happened to him.

His family and police have contacted Jefferson Lines, but McKelvey said staff cannot confirm if Higgins made it to the Twin Cities or if he got off at a stop.

A missing person report was filed due to “unusual circumstances” surrounding Higgins’ disappearance.

Higgins wrote a note saying he was going to a church convention or seminar, but local and Minnesota church affiliates said they aren’t hosting any events, McKelvey said, noting a second letter allegedly sent by Higgins expressed “some possible paranoid beliefs.”

His phone has either been shut off or doesn’t have power, McKelvey said.

Police do not feel that Higgins is a danger to others, but are concerned he could be taken advantage of in his current state. He could also be at risk due to weather conditions, if he is living homeless in the Twin Cities.

Many leads in several jurisdictions have been followed up on over the last few days, according to McKelvey. The Minnesota Bureau of Criminal Apprehension is assisting in Minneapolis and St. Paul to see if anyone has seen Higgins.

Higgins also went missing about two years ago, according to McKelvey.

Anyone with information regarding Higgins’ whereabouts is asked to contact the Mason City Police Department at 641-421-3636.