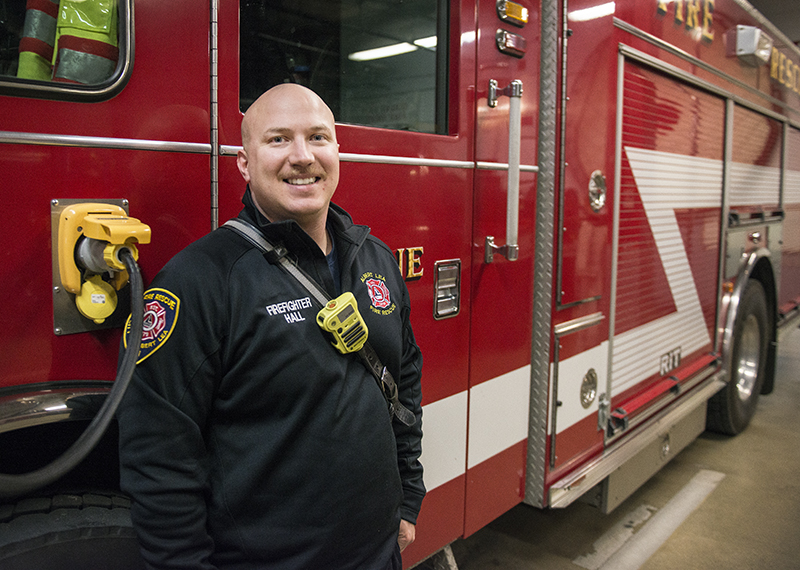 Firefighter hired in Albert Lea after being on-call in Austin

Over a month into the job, one Austin man is already sold on Albert Lea.

Josh Hall, 32, started as a full-time firefighter for Albert Lea Fire Department on Sept. 4. Born and raised in Austin, Hall said he and his wife are looking to relocate to Freeborn County with their 2-year-old son.

Before joining the Albert Lea Fire Department, Hall was a paid, on-call firefighter for Austin for the past five years while working as a full-time painter out of Brownsdale. He had been hoping for a full-time firefighter job for quite a while, and jumped at the chance when Albert Lea had a spot open after the retirement of Capt. Scott Hanna.

Hall said he’s thankful for the opportunity to work for this community.

“I’m grateful for the opportunity to serve Albert Lea,” he said.

While Albert Lea is a smaller community, Hall said he has noticed how spread out it is.

He said while he’s still learning the layout of Albert Lea, everyone on the department and those he has come into contact with in the community have all been welcoming and friendly. His first month on the job has been filled with mostly medical calls, along with a few fire calls, Hall said. The medical side of the job is something he’s used to, as he was previously an EMT in Adams for four years.

Another thing to get used to is the schedule of a full-time firefighter. Hall said the Albert Lea department runs on what’s called the “Santa Monica schedule.” Firefighters work 24 hours before being off 24 hours. That cycle goes for three sets before a firefighter is given four days off in a row. Hall said it’s a good balance of work with time to catch up on sleep, family time and life in general.

For Hall, choosing to be a firefighter was a no-brainer. He said it’s a career that spans all different kinds of events, and while the majority of the job is helping people during the hardest days of their lives, mitigating how bad those days can be is a job he wants to do.

“It’s a rewarding career,” he said.

Interesting fact: likes riding his motorcycle in his spare time