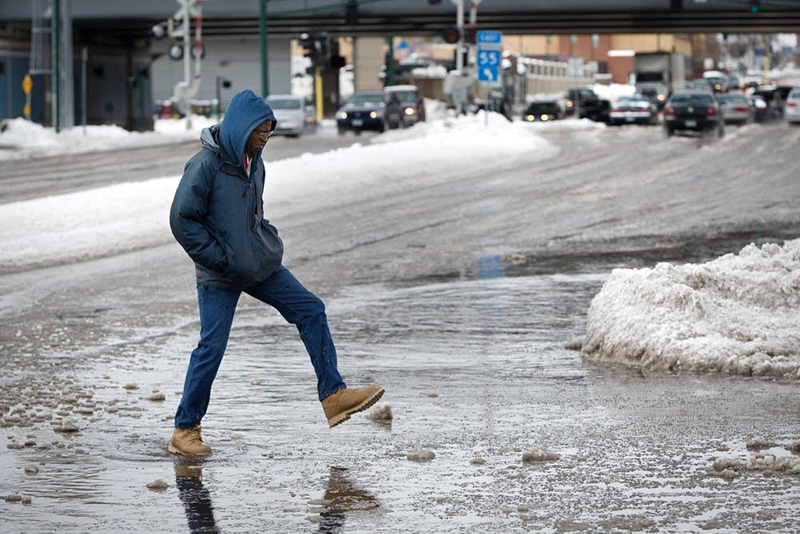 A pedestrian makes his way through the snow melt across Lake Street in Minneapolis. - Jennifer Simonson/MPR News

What does U.N. climate change report mean for Minnesota?

The United Nations’ Intergovernmental Panel on Climate Change has released a new report that details just how much scientists say we need to limit greenhouse gas emissions to avoid catastrophe.

It’s a high-level report that looks at the global effects of climate change, but what does it mean for Minnesota?

What does the U.N. report say?

The report outlines many details about climate change that are already known. For instance, that we have already seen global temperatures rise by 1 degree Celsius — nearly 2 degrees Fahrenheit.

A degree or two doesn’t sound like a lot, but this report shows the impact that global warming has had on people and ecosystems: Deadly heat waves, extreme rainfall and sea-level rise. All of those changes, the report says, will affect many things, but especially where and how we’re able to grow food.

The report also details what’s likely to happen if temperatures were to rise another 3 degrees Fahrenheit or so. Scientists say there will be negative consequences from more warming — but they also say humans and ecosystems will be able to adapt to that warming if we’re able to keep the magnitude of the rise in check.

In contrast, if we keep burning fossil fuels like we have been, temperatures could rise by a lot more than 3 degrees Fahrenheit, and that could be catastrophic in many parts of the world.

Are there any visible effects of climate change here in Minnesota?

The most significant change Minnesota has seen is warmer winters, which can affect everything from ice on lakes to the snow season for winter recreation — and even the types of animals, trees and insects that are thriving across the state.

Fall, as the leaves change, is a good time of year to see that shift: Red maple have spread throughout the typically pine- and spruce-heavy boreal forest in response to rising temperatures, and other tree species, like tamarack, are dying from beetle infestations.

Minnesota is also getting wetter, thanks to climate change, as more of the state’s precipitation comes in the form of heavy rainfall.

That has a whole range of effects — in cities, it means more flooding and problems with infrastructure. And in the rural areas of the state, it can hurt farmers: Heavy rain can erode the soil they use to grow crops, making it tougher to do field work.

This week is a good example of those challenges: Farmers would normally be harvesting corn and soybeans this week, but in some places, they can’t get a tractor in the field because it’s so wet.

And even if they are able to get in and take the crops out, the grain will need to be dried out, and that involves extra expense. It also involves burning more fossil fuels, because most grain is dried with propane.

It seems that, when we hear about global climate change, we often hear about major damage from extreme weather like hurricanes and heat waves. Where does Minnesota fit into that picture?

If we look at the observed data, Minnesota so far has not seen increases in heat waves.

Minnesota doesn’t have hurricanes, either, but the state does experience other types of severe weather: Tornadoes, for instance. But we don’t have data showing an increase in tornadoes in Minnesota, and climate scientists say higher temperatures don’t necessarily translate to more severe weather — it’s more complicated than that.

But if we look at the climate models, here’s what we can say about Minnesota: The state is likely to get even warmer — and those really frigid winter days and nights will become exceedingly rare.

Extreme rainfall will also likely increase. The climate models say that, even if Minnesota hasn’t seen increases in heat waves so far, we’re very likely to see those increase in the future. Droughts are also likely to increase.

The U.N. report says emissions will need to be significantly reduced if we want to limit global warming. How is Minnesota doing on that front?

Minnesota is doing better than some other states and countries on this, but we’re not on track to reduce emissions by the magnitude set out in this latest report.

The easiest way to think about this is by looking at where greenhouse gas emissions come from. Traditionally, that’s been from producing electricity. Coal-fired power plants are being retired, and Minnesota does have two nuclear plants that are producing carbon-free electricity.

Even so, the state will have to speed up its adoption of wind, solar and battery storage if it wants to meet these latest emissions targets. And it will also have to decide what happens to Xcel Energy’s two nuclear plants, which are getting old and expensive to operate. Can those be replaced by renewable energy and battery storage systems?

But even if we stop burning fossil fuels for electricity by the middle of this century, scientists say we have to address two other large sources of greenhouse gas emissions: transportation and agriculture.

In Minnesota, most of our cars, trucks and buses still run on fossil fuels. And the ways we grow crops and raise livestock right now also contribute significant emissions. The latest climate report says the types of system transitions scientists say are needed are unprecedented in scale. But it also points out there are a lot of examples throughout history of rapid, transformational change through innovation.

Are changes to Minnesota’s emissions really enough to make a difference in this global picture?

No. We’re a drop in the bucket, but that can be said about any city, state or region. Some policymakers say Minnesota shouldn’t put much effort into reducing emissions, because we really have no control over what superpowers like China and the U.S. will do to address climate change.

On the flip side, others argue that the things Minnesota can do to reduce its own emissions — accelerating the adoption of electric cars; transitioning away from coal and natural gas electricity and heating, changing agricultural practices to sequester more carbon in the soil — have other benefits. For example, studies have shown that burning less coal and oil can help avoid emergency room visits and premature deaths from air pollution.

What policymakers are having to figure out is how much it costs to invest in the type of changes that lead to reduced emissions and compare that to what it would cost society to do nothing.