‘A year of opportunity’ 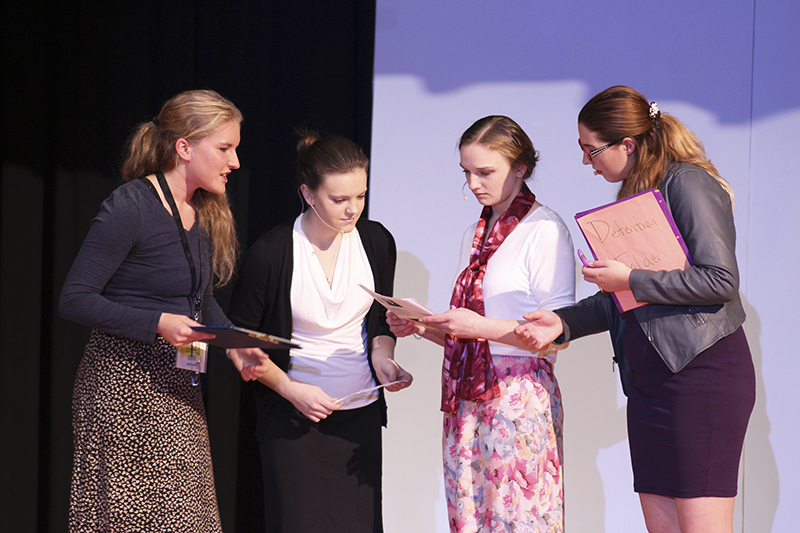 Principal Donnelly, played by Monica Bute, inspects a flier for an event the school is hosting after a teacher finds it scattered around English teacher Miss Dower’s homeroom. Teachers speculate about where the missing English teacher is. - Sarah Kocher/Albert Lea Tribune

Director Ada Theusch said the show, “The Ransom of Miss Elverna Dower,” has colorful and descriptive characters, and her students have taken those roles and run with them.

“Different characters like that really add pizzazz to the show, as well as give the students something to latch onto and make their own,” she said.

Those characters range from a school custodian whose obsession with “Star Trek” turns all his maintenance conversations into space speak, to a teacher whose obnoxious tie plays tinny, slightly off-key Christmas music on repeat. They also include seemingly normal high school students who make a highly abnormal decision: to kidnap their English teacher to avoid taking a test. The only problem?

No one wants her back.

For both sophomore Kim Meislahn and junior Robert VanRiper, who play kidnapping students Casey Matthews and Tim Stack, respectively, their roles are bigger than ones the two have taken on in the past.

“It’s challenging, but I’m ready and excited for it,” VanRiper said. He has performed in Alden-Conger plays since coming to the secondary school in seventh grade.

For Meislahn, there are some nerves there, but also some confidence she can do it, she said.

“This is the biggest role I’ve ever had,” she said. “I’m pretty terrified, but mostly I have my lines down.”

She said playing students has been fun because it allows her to wear her own clothes and have more say in her hair and makeup looks.

“It gives you a lot of creative freedom,” she said.

Senior Monica Bute is stepping into a slightly less familiar role as principal. Watching the grade above her perform and gain experience was inspirational for her, she said. She has enjoyed watching her fellow cast members turn their characters into real people.

“I think my favorite part is watching everything come together,” she said.

At 31 actors and 11 crew, the cast is slightly bigger and slightly newer to the stage than previous years.

“It’s been a year of opportunity,” Theusch said — opportunity for her students to show their potential as actors.

The show is also an opportunity for the audience to get in a few laughs, VanRiper said. 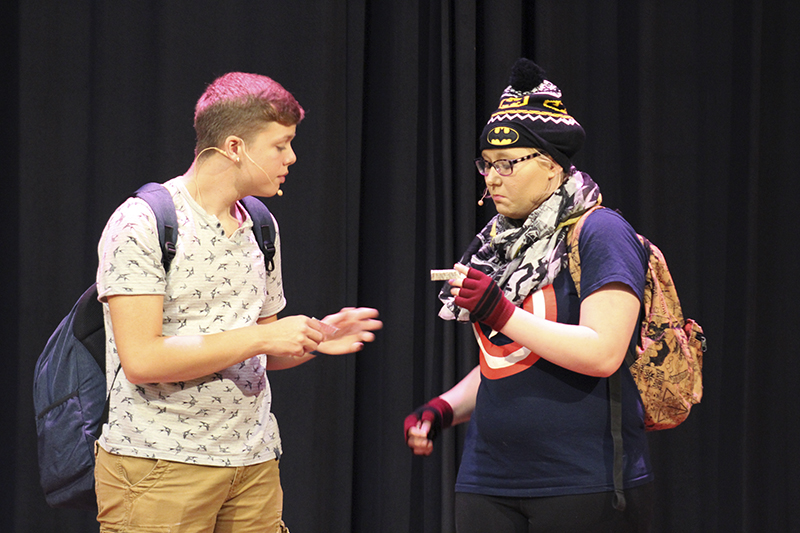 What: “The Ransom of Miss Elverna Dower”

How much: $6 for adults, $4 for students and seniors 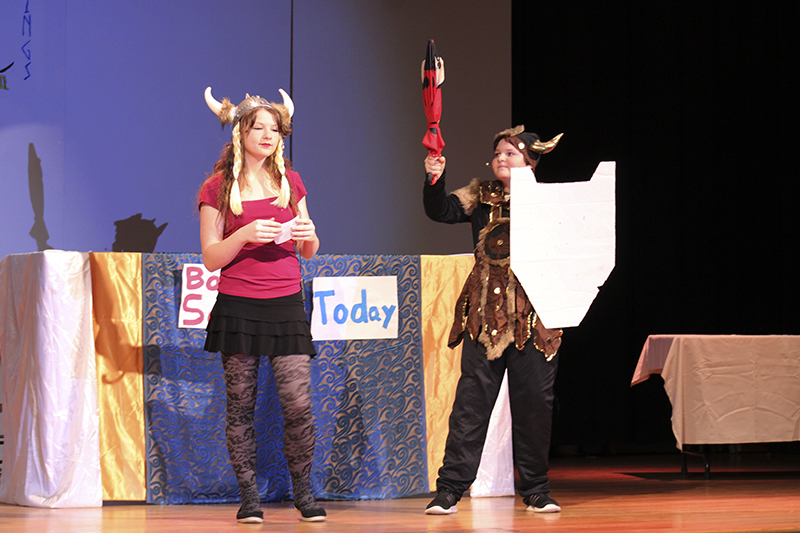 Mascot Erik the Viking (Eli Thelen) tries to convince his cousin Michelle (Izabelle Thostenson) to join him as a mascot-in-training for the school. – Sarah Kocher/Albert Lea Tribune