An Albert Lea man who allegedly strangled someone he knew Thursday was charged with a felony the following day in Freeborn County District Court. 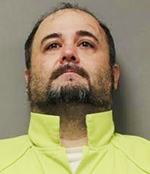 Kevin Badman Painter, 38, is charged with domestic assault by strangulation.

Court documents state Painter was charged after an Albert Lea Police Department officer responded to a call for assistance regarding an alleged assault at approximately 10:20 p.m. Thursday at 1025 St. John Ave. The alleged victim was described as saying she was in pain in her lower back, head and throat after Painter strangled her.

She reported that during a confrontation, Painter struck her in the face with his hand and strangled her.

Judge Steven Schwab released Painter on his own recognizance Friday, contingent on him not using alcohol or controlled substances, submitting to random testing, not using or possessing firearms or dangerous weapons and following other court requirements.

Painter’s next court appearance is scheduled for Oct. 25.