‘Bullying has no place’ 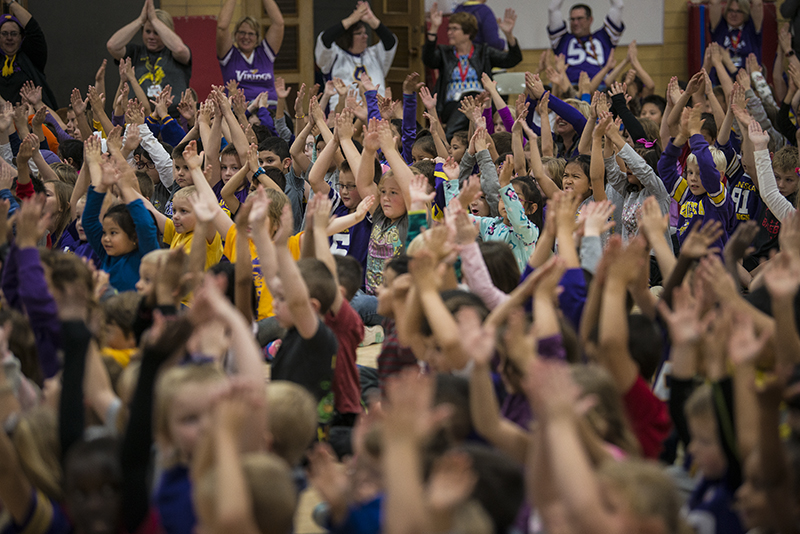 Hawthorne Elementary School students and staff do the "Skol" chant Wednesday during a visit from the Minnesota Vikings mascot. - Colleen Harrison/Albert Lea Tribune

Hawthorne Elementary School students were given lessons on preventing bullying Wednesday from Minnesota Vikings mascot Viktor the Viking and other organization members.

The visit was part of Viktor’s Quest to Stop Bullying, an initiative including visits by Viktor the Viking to schools across the state and Iowa to teach students the importance of not bullying. The visit to Hawthorne took place during National Bullying Prevention Month.

Viktor the Viking was greeted enthusiastically by students, and the mascot non-verbally urged students to continue exclaiming their opposition to bullying through expressing their knowledge of the STOP bullying acronym throughout the 40-minute assembly.

Students were led on the trademark “Skol Vikings” chant and viewed Vikings highlights.

At one point, two students demonstrated the lasting effects of bullying by putting on signs describing the abuse and briefly carrying it around with them.

Minnesota Vikings players Adam Thielen and Danielle Hunter, cheerleaders Lauryn and Mariah (Vikings cheerleaders go by first name only for safety reasons, according to the organization) and radio announcer Paul Allen discussed bullying with the students via video. The types of bullying and examples were discussed, including verbal, physical, social and cyber abuse.

Prior to the presentation, Hawthorne Principal John Mahal said the visit “reinforces the work they’ve been doing.” 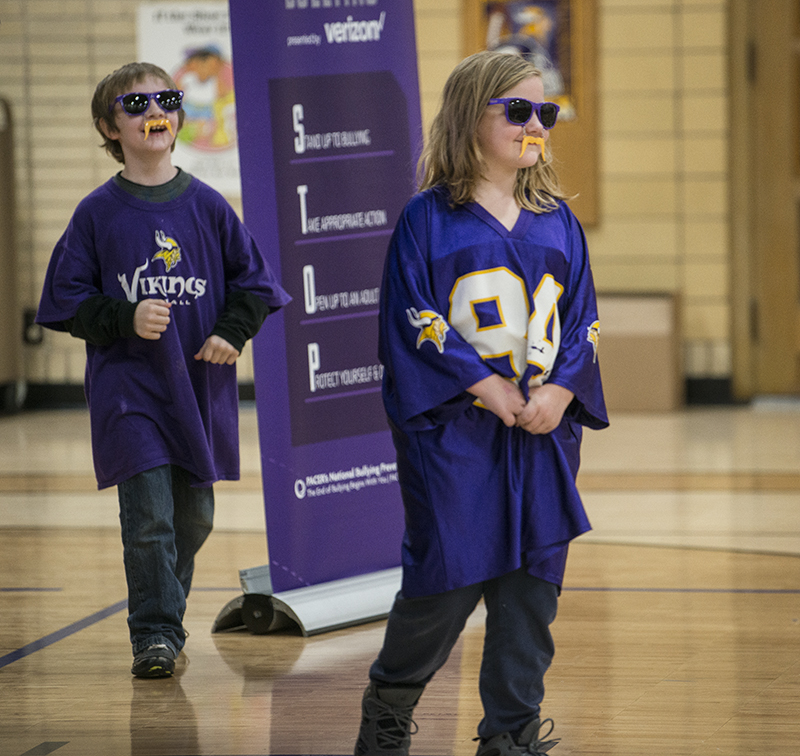 Students who volunteered for a demonstration during Wednesday’s assembly show off their Vikings prizes as they walk back to their seats. – Colleen Harrison/Albert Lea Tribune

“Bullying has no place at Hawthorne,” he said.

“It’s something that really resonates with the kids and is one of the way that the Vikings (are) able to reach out and kind of make a difference in the communities for the future generations,” she said before the ceremony. “It’s something that I really enjoy doing with Viktor.”

She said they have done two to three shows every week, which could increase to once per day.

“We’ve had a lot more shows going on now, and I feel like it’s really important for the kids … especially right now, all that’s going on now,” Emma said.

“We’ve been talking a lot about bullying this month in class, and different people have been talking about it,” she said. “And I think that hearing it from these professional athletes and Viktor the Viking makes a huge difference for the kids, and they really see other people besides us just talking to them about it.”

As part of Bullying Prevention Month, the school will host Muffin Morning Friday, an event where muffins and juice will be served to parents and students to symbolize a supportive, community feel.

After the ceremony, third-grader Miya Larsen said she enjoyed it.

Fellow third-grader Jordan Johnson called the event “exciting” because they saw Viktor the Viking, cheerleaders and Vikings players. She learned about bullying and the importance of not participating in it.

To Wangen, the event was important for students.

“These kids are young and impressionable, and it’s so important for them to understand what bullying is and know how to prevent it and how to, if something is happening to them, understand that we are here for them and we are here to stop it and keep it under control,” she said.

After the ceremony, Mahal called the event “great.”

“It was a great message for the students to be able to hear, not only from what we try to do already, but from another entity to come — like the Vikings — to come and promote it,” he said. “You could see all the school spirit.” 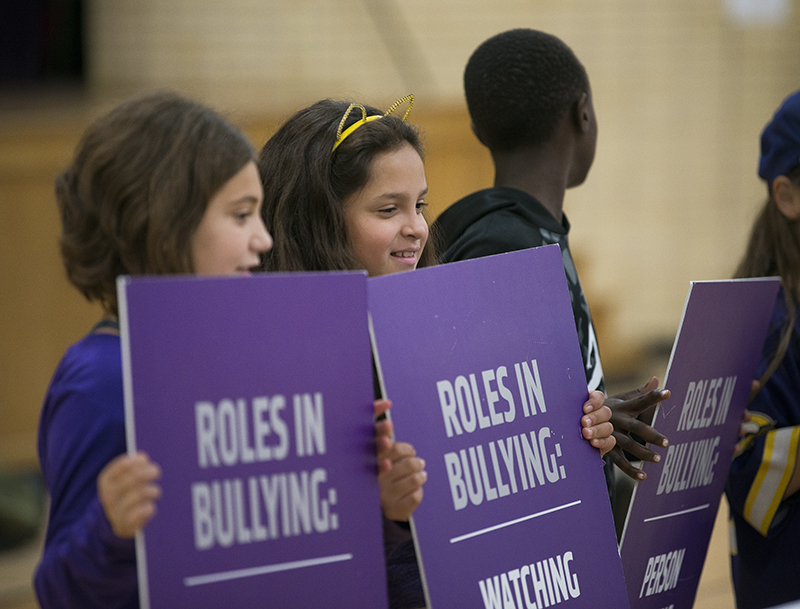