Candidates face off in debate 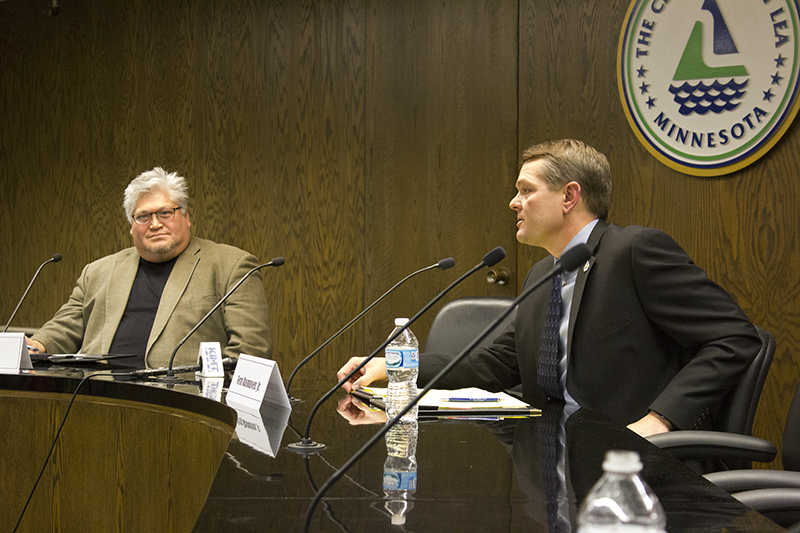 Candidates for Albert Lea public offices on Monday pledged to support bringing in a second provider to replace services lost in Mayo Clinic Health System’s in-progress transition of most inpatient services from Albert Lea to Austin.

Each debate lasted approximately a half hour. A few dozen people were in attendance.

To replace services lost in the transition, Rasmussen called for evaluating public requests and speaking with possible second health care providers. He added the city needs to be fiscally sound and understand what its investments will bring.

Rasmussen has recused himself from council discussions on the transition issue based on his employment as a physical therapist at Mayo Clinic Health System at Health Reach.

At one point, Marin took aim at Rasmussen, saying he would never recuse himself from such discussions.

Rasmussen replied that he had to support his family and that Marin would not have had to recuse himself because he was not employed by the hospital system.

Marin, who raised the first initial commitment of $1,200 to Save Our Healthcare, called for creating the most welcoming environment for a second provider in southern Minnesota, and said by doing so, competition would be created.

Brooks said Save Our Healthcare has done “a tremendous job.”

He called the transition “terrible,” and pledged to try to help the city attract a second provider.

Ronnenberg promised to support Save Our Healthcare in its mission to attract a provider to fill in the gaps left by the transition.

Olson called for facilitating the entrance of another provider into the community, which could include providing open land or buildings. He noted another health care provider would only enter the community if it believed it could make money.

Hagen agreed, pledging that if elected, he would work with providers to facilitate their entrance into the community.

“Competition is healthy,” he said.

In the wake of investments made in downtown Albert Lea and the South Broadway Avenue corridor that have been credited by officials as improving the community, Marin said additional investments need to not be funded by the city. He derided the council’s decision in April 2017 to increase Albert Lea City Manager Chad Adams’ salary from $124,000 to $135,000.

He called for a hiring freeze in mid-level city management positions, adding he has heard from private industries that they have had to cut back on such employees.

Rasmussen said he supports funding solutions that do not raise taxes. He noted there has been substantial increases in downtown revenue since the improvements were made, and crashes are down on the South Broadway corridor since it was downsized from Main Street to Seventh Street.

Hagen said the city needs to evaluate any grant funding for the project and called for the hiring of a grant writer.

According to Brooks, to maintain and grow investments the city has made, its tax base needs to grow.

Ronnenberg said the city needs to create a tax incentive plan and called for working with businesses to entice them to enter the community. 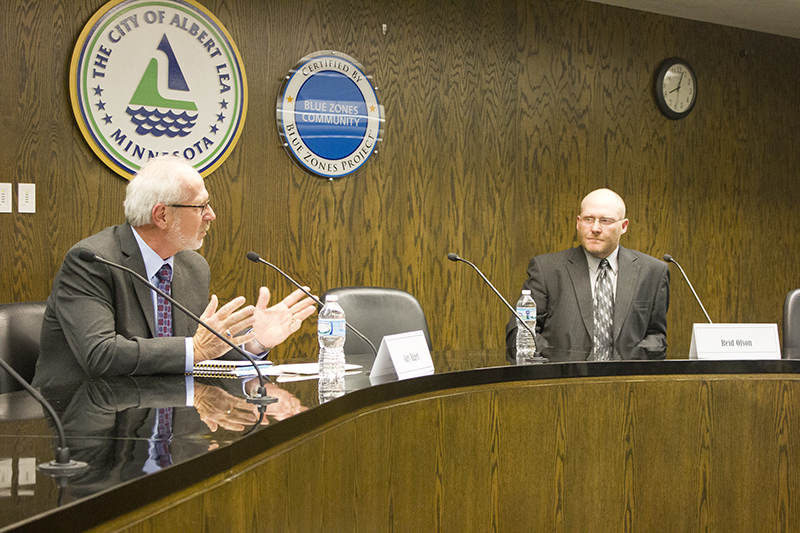 Rasmussen said if regulations limiting phosphorous levels at wastewater treatment plants are passed, the city could be on the hook for $60 million. He said Albert Lea needs to work with the Minnesota Pollution Control Agency during the process and other local government agencies to fight the rules.

If the rules are passed down, Rasmussen claimed the city would “go bankrupt.”

Marin said he is not sure if the plan will be implemented, claiming it would have a “devastating effect on homeowners.”

He accused the city of playing a shell game by stating it had not raised the operating levy in years while increasing rates.

Olson pledged to work with legislators on the issue.

To Olson, the rule will likely not be implemented.

Hagen said the cost would be a “tremendous amount of money,” and would be an unfunded regulation. He said city officials must keep in touch with legislators about the proposed rule.

Ronnenberg said though runoff must be addressed, the city needs to be prepared if the regulation is passed down.

Brooks called the proposed rule “unfortunate.” He said the city needs to work with legislators to show them it is not a good rule and should not be in place.

If the city received a $1 million grant

Hagen acknowledged $1 million for community needs was not a lot of money for public projects and likely would not solve the local health care crisis.

Olson called for building baseball and soccer fields with the funding, adding he notices growing metro regions have such facilities and generate tourism dollars and tournaments.

Marin said he would use the hypothetical funding to help bring in health care services, an issue he called the No. 1 concern he heard about while door-knocking.

Rasmussen said he would use the funding for infrastructure needs and possible private-public partnerships.

Brooks said the city should save some of the hypothetical revenue for a worst-case scenario, adding he would like some funding to develop Blazing Star Landing.

Ronnenberg, who noted he was a long-time employee in the banking industry, said the city would need to use the funding to ensure it has enough left-over money, adding he would like some funding to go toward prioritized projects.

Necessity of a full-time fire department

Ronnenberg said it was needed based on plans for the new approximately $9.5 million fire station east of the Freeborn County Law Enforcement Center.

Olson said he has consistently not supported revisiting the necessity of having a full-time fire department.

Hagen said the full-time fire department is necessary due to the new facility and discussed public support for the unit. He acknowledged surrounding cities have said they want similar departments and that the presence of one in Albert Lea has likely increased taxes.

Rasmussen and Marin said the community has supported the department but acknowledged the presence of a full-time unit likely should be occasionally revisited.

Rasmussen said though the city should look to be as financially efficient as possible, he supports the department.

Marin said he has been one of the strongest supporters and pushed back against statements that he was not for a full-time unit.

Hagen said the city needs to forge a closer relationship with the Albert Lea Economic Development Agency and other organizations to help foster growth.

Olson called for the city to work with organizations — including state government — to help entice businesses on incentives that could include tax breaks and grant funding.

Marin said the council is the main economic driving force in Albert Lea because of its final say on land transactions. He said a “progressive, proactive approach” is needed and pledged to work with businesses in the city.

Brooks said he wants the city to play a larger role in economic development.

Ronnenberg said the city needs to work with ALEDA to ensure cohesion. 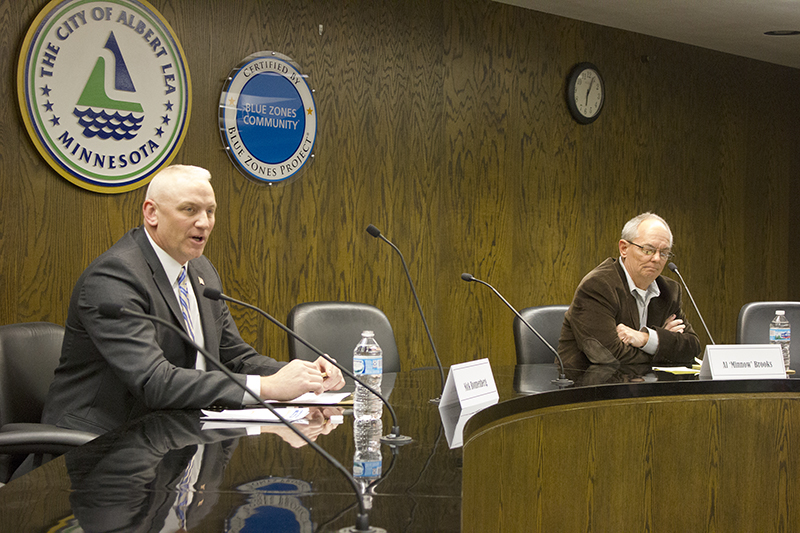