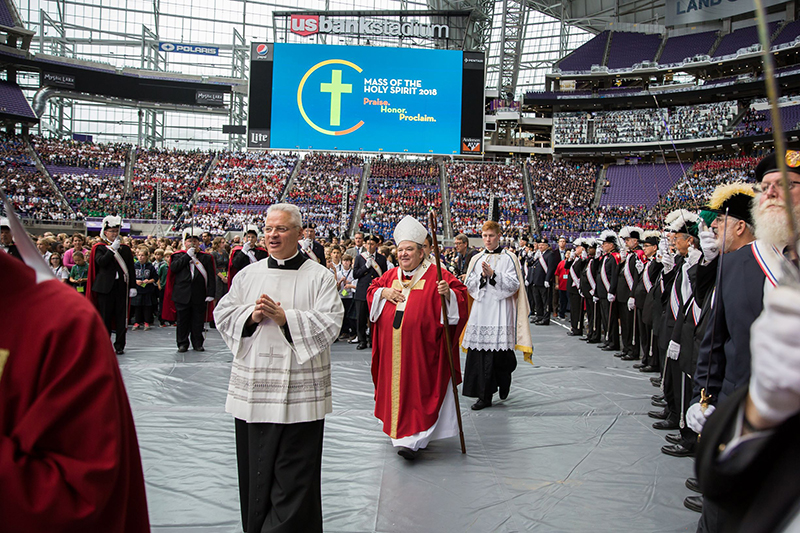 Archbishop Bernard A. Hebda leads the procession into the Mass of the Holy Spirit at U.S. Bank Stadium. - Provided

Twelve thousand fourth- through eighth-grade students from the 79 Catholic elementary schools in the Archdiocese of St. Paul and Minneapolis celebrated the second Mass of the Holy Spirit to help kick off the new school year, according to a press release. The event was organized by the Catholic Schools Center of Excellence and sponsored by the Knights of Columbus.

“The day’s theme was to put faith in action,” said Melissa Hamilton, CSCOE spokesperson. “We were so excited to hold this beautiful celebration of our faith for our students. Our hope is that the students will take the day’s message of faith in action with them throughout the year, by helping their classmates and teachers, by saying hello to a new student or by making someone’s day with kindness or a smile.”

The Mass and its theme of putting faith in action was illustrated that day with the Knights of Columbus Coats for Kids program. Children attending the Mass brought winter items like hats, gloves and coats for collection by the Knights, who will distribute them along with some new coats throughout Minnesota in the days and weeks ahead. The Knights also distributed new coats to students at St. Peter Claver in St. Paul on Tuesday, the day before the Archdiocesan Mass.

“A Mass of the Holy Spirit at the start of the school year is a venerable tradition made richer by extending it to the youngest students,” said Marc Peters, state deputy of the Minnesota Knights of Columbus. “We are happy to couple this prayerful event with our Coats for Kids program and the children’s own donations of winter clothing for their classmates. It makes for a true and effective lesson — for all of us — in the joy of charity.”