Funeral services for Darlene M. Dobberstein of rural New Richland will be at 11 a.m. Wednesday at First Lutheran Church in Waldorf. The Rev. Giles Zimmer will officiate. Visitation will be from 4 to 7 p.m. Tuesday at Friedrich Funeral Home in New Richland and one hour prior to the service at the church. Interment will be in Waldorf Cemetery. 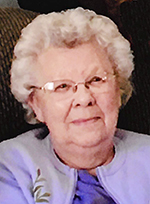 Darlene was born June 27, 1934, in Glenville, the daughter of Nels and Inga (Burkhow) Mehus. She attended public school in Glenville and graduated from Albert Lea High School.

She was united in marriage to Carl Dobberstein on June 9, 1956, at First Lutheran Church in Glenville.

Darlene made her home in rural New Richland since 1958, where she helped her husband on the family farm. She was an active member of First Lutheran Church in Waldorf. At one time she had been a member of the Area Extension Club. Darlene loved gardening and raising flowers, card club, bingo, baking and cooking, and raising chickens.