Dewayne Roppe, 93, of Northwood passed away Tuesday, Oct. 23, 2018, at Mercy Medical Center North Iowa with loved ones at his side. 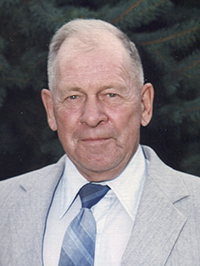 A funeral service will be at 3 p.m. Saturday at First Lutheran Church, 309 Ninth St. N. in Northwood. The Rev. Judy Converse will officiate. Burial will be in South Shellrock Cemetery in Northwood. Visitation will be from 4 to 7 p.m. Friday at Conner Colonial Chapel, 1008 First Ave. S. in Northwood.

Dewayne Roppe was born March 22, 1925, near Joice, Iowa, to Ernie and Alma (Aamodt) Roppe. He was baptized at North Shell Rock Church in 1925 by the Rev. Carl Yilvasaker. He grew up on the family farm, graduating from Northwood High School in 1943. In school Dewayne was a talented musician who played the accordion, tuba and piano. He could always be found at the train station, playing his accordion for the soldiers coming in and departing from the train station. Dewayne continued life on the farm, and on March 14, 1952, married the love of his life, Mavis Hillman. To this union five children were born: Julie, Debbie, Bonnie, Mary and Amy. Together the family grew on the farm outside of Northwood, where he built them a house they could be proud of. Dewayne also offered his services as a tractor and bailer mechanic to all of their neighbors. He threshed around the area as well. Dewayne was still actively farming when Mavis passed away in 2009.

Dewayne loved music. It could almost be said that he loved music more than farming. It was a talent that came naturally to him, never taking an official lesson. His home was referred to as Grand Central Station, as there was always company coming in and out. Dewayne enjoyed being connected with others, always finding the time to catch up. He was known as the Worth County historian, as he knew just about everyone and a story to go along with them.

Dewayne’s greatest treasures in life were his family.