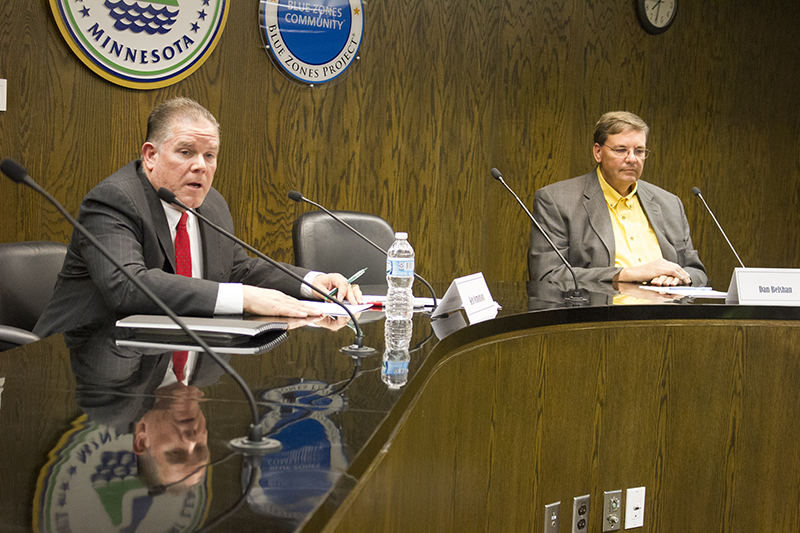 Belshan predicted the transition of most inpatient services from Albert Lea to Austin will effect Albert Lea and Freeborn County economically and questioned whether prospective residents will still want to move to Freeborn County without a place for expectant mothers to give birth.

Osmonson called the transition “disappointing,” adding Freeborn County should have been better prepared for the transition based on the earlier reduction of services and employees at the Mayo Clinic Health System-owned hospital in Fairmont.

He said the county needs to work with other possible health care providers, adding the continued hatred of Mayo Clinic Health System because of the transition of services will not solve the problem.

Belshan said a second health care provider must enter the community to alleviate the loss of inpatient services.

Despite an expected $5 million yearly county transportation funding shortage through 2025, Belshan said taxpayers cannot be expected to pay significantly more in taxes. Belshan called for every county department to cut its spending by 1 percent, a move he said would save $500,000.

Osmonson said the county’s largest challenge is likely maintaining its road system despite the funding shortage.

The forum was sponsored by the Albert Lea-Freeborn County Chamber of Commerce.

Osmonson and Belshan were given two-minute opening and closing statements.

The debate came one week before the Nov. 6 general election.

Should any county departments be shielded from potential cuts?

Osmonson said all county departments need to be evaluated for possible cuts, adding the county board needs to be financially accountable to constituents. He said shielding certain departments from cuts would be perceived as favoritism.

Belshan said any shielded departments would be providing state-mandated services. He called for the county not to spend $400,000 to adjust wages to be more competitive in the workplace, a move advocated by Freeborn County Administrator Thomas Jensen.

Belshan said even if the planned spending to adjust wages was canceled, staff would still receive step increases and cost of living adjustments. He called for closing the Freeborn County Mental Health Center, a licensed clinic providing chemical dependency services, therapy and psychiatric and psychological services. He said if the clinic closed, the county could work with Mayo Clinic Health System for the services.

Osmonson said the county board provides leadership and clarity for county staff.

Belshan said the top duty for a commissioner is to spend public dollars responsibly.

Vision for Freeborn County for 10 years

Belshan said he wants a full-service hospital to return to Freeborn County and government regulations to be reduced.

Osmonson said the county needs to have a better partnership with either Mayo Clinic Health System or another provider, noting attracting health care services will likely take financial incentives, which could include tax increment financing districts.

Vision of Freeborn County in 2025

Osmonson said he wants the county to have a medical center and larger businesses by 2025, adding the county’s location at the intersection of interstates 35 and 90 is an ideal location for growth.

He said the county needs to promote its location, predicting that would stimulate job growth and attract younger employees.

Belshan said rules and regulations will hopefully be lessened by then to aid business development.

Freeborn County recently completed a strategic plan that targeted workforce and personnel, collaboration and cooperation by government agencies, the redesign and sustainability of county services, infrastructure, and funding and budgeting as top issues.

Belshan and Osmonson said funding and budgeting were top issues.

Belshan said the county collaborating with other government entities is also a top priority, noting Freeborn County has already worked with the city of Albert Lea by sharing use of the Freeborn County Law Enforcement Center.

Osmonson said employees must be taken care of for an organization to grow, adding not doing so leads to high attrition rates and replacement costs.