Elwood Lloyd Klingbeil, 91, lifelong resident of Bricelyn, died Friday, Oct. 26, 2018 at The Shepherd’s Inn in Wells surrounded by his family. A funeral service will be at 11 a.m. Tuesday at Bricelyn Lutheran Church with Matt Hundley and Steven Lorenz officiating. Visitation will be from 5 to 7 p.m. Monday at Bruss-Heitner Funeral Home in Bricelyn and will continue one hour prior to the service at the church Tuesday. Interment will be at Rice Lake Cemetery in Foster Township, Faribault County. Bruss-Heitner Funeral Home of Bricelyn is in charge of arrangements. See www.brussheitner.com to leave online condolences. 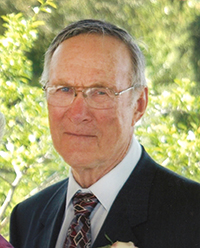 Elwood Lloyd was born March 25, 1927, the son of George and Clara (Courrier) Klingbeil. He attended and graduated from Faribault County School District  No. 51 on June 26, 1940, and went on to graduate from Bricelyn High School on May 24, 1944. After graduation, Elwood worked as a farmer with his father in rural Bricelyn.

On Sept. 7, 1949, Elwood was united in marriage to Geraldine Wegner at Rice Lake EUB Church.

Elwood’s life centered around constantly improving his farm, his love of horses and the land while raising his five children and trying his best to serve the Lord in any way he could. He served his church faithfully and generously with the gift of time, and used his singing talents for Solo and Gospel Quartet.

He spent many years volunteering his time and talents to Prairie River Camp near Bricelyn. Elwood was a founding member on the board of directors for Christian radio station KJLY in Blue Earth and spent many hours in prayer ministry there. In 1985, Elwood and Jerri spent three months in Kailua-Kona, Hawaii, attending YWAM Discipleship Training School. Elwood traveled to Russia with his son, Paul, for a mission trip in 1990.

At the 2005 Faribault County Fair, Elwood was awarded the Outstanding Senior Citizen Award. In 2010 his farm received recognition status as a Century Farm for Faribault County.

He is preceded in death by his parents and wife, Geraldine.

It is noted that one of the best attributes he passed down to his children and their children was a strong work ethic for them to succeed in whatever they do, and his tremendous love for his Lord and Savior Jesus Christ.