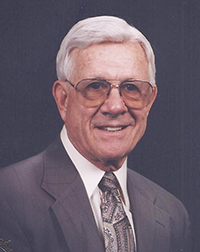 At an early age he sold the Saturday Evening Post magazine and Ladies Home Journal door to door; later he had a paper route, and sometimes in those years he shined shoes at Royal Cleaners. In Gene’s senior year of high school, he worked as an order boy in the Hormel office. He graduated from Austin High School in 1942 and enlisted in the Navy Air Corps after graduation. He attended four colleges and universities while in the Navy. He was later transferred to the special devices division in Washington, D.C., and in 1944 he was transferred to the West Coast division and helped set up that division of special device. He was discharged from the Navy in 1945.

Taking advantage of his Navy experience, Gene started Star Amusement and Vending Co. in 1949, operating out of Austin, Albert Lea and Rochester. In 1975 he sold his vending business to Canteen Corporation of America and after selling the amusement part of the business to D and R Star from Rochester in 1976, he retired at 53. Gene came out of retirement and purchased Echo Lanes Bowling Alley in 1977 and sold it in 1983.

Gene helped organize the Amusement Operators of Minnesota and served two years as president and served on the board of directors for three years. He also served three years on the board of directors of the Minnesota Vending Association. He was a member of Austin American Legion Post No. 91 and a charter member of Acapulco American Legion Post No. 4. He was a member of Service Corps of Retired Executives and was also a member of the Elks Club of Austin.

Gene married his loving wife, Donna Voss, in October 1982. They were married for 30 years. They spent many enjoyable winter months in their second home in Acapulco, where they had made many friends. They were active members of Friends of Acapulco, U.S. Navy League and Salvation Army Children’s Orphanage. Gene was also a member of the Professional People Club. His lovely wife, Donna, passed away July 23, 2012.

Gene took much pride in his yard work and also repaired and rebuilt many bicycles for his grandchildren and neighborhood children, many of whom called him Grandpa. He loved having his family and friends around him.

He was devoted to family and friends, helping many to find their goals with both loving support and financial help. His kindness and work ethic, sense of humor and the stories — both those about him and those he told — will live on in the minds and the hearts of all who knew him.

A memorial service will be at 11 a.m. Saturday at Clasen-Jordan Mortuary. The Rev.  Michael Olmsted will officiate.  Interment will be at Grandview Cemetery. Austin Post No. 91 American Legion is in charge of military rites. Visitation will be one hour before the service. Memorials may be designated to the Salvation Army.