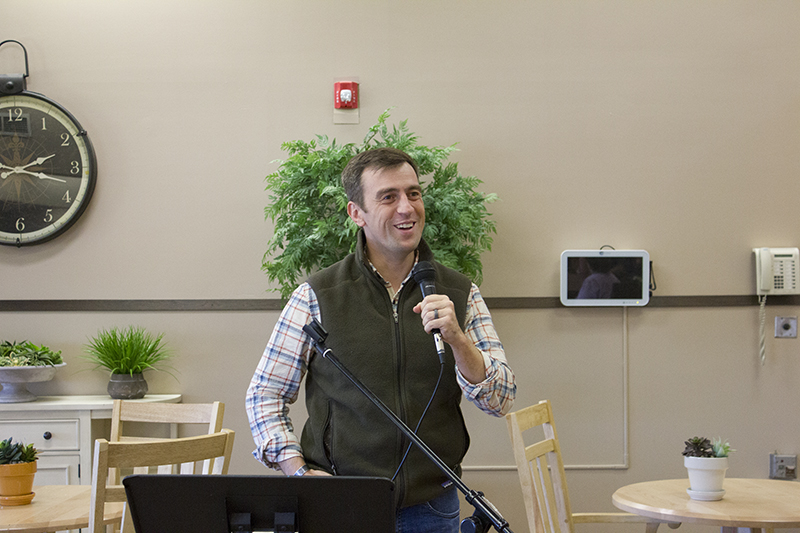 Feehan made the comments during a visit to Good Samaritan Society of Albert Lea.

Feehan’s visit to Albert Lea also included a tour of Albert Lea Seed House and a farm tour with DFL District 27A Rep. candidate Terry Gjersvik. It came less than three weeks before the general election in the race pitting him against Republican Jim Hagedorn.

During the approximately 30-minute meet-and-greet with seniors, Feehan, DFL-Mankato, said reimbursement rates for long-term care were not sufficient.

“As advents of technology happen, cost increases along the way, so there has to come continual conversation to make sure that what people have earned, their Medicare, keeps up with it too,” he said.

To Feehan, Congress is supposed to ensure long-term care remains for patients.

He said private insurance companies should be able to make money, but when prices increase disproportionately, “it’s time to do something about that.”

To Feehan, more competition is needed in health care, and he called for a public option.

He said health care in southern Minnesota should be “the best in the country” based on Mayo Clinic being in the region, but described health care as the No. 1 issue he has heard about on the campaign trail.

He said current shortages in local health availability should not be a reality.

“We’re in a system that does not set up people for long-term success,” Feehan said.

He also spoke against the recently-passed tax bill, which he said increases the deficit by $1.9 trillion, making it harder to pay for Medicare and Social Security.

Feehan said though he supports tax reform, he wants millionaires and billionaires to pay their “fair share.”

Feehan told seniors he would work with President Donald Trump when needed and oppose him if it was necessary.

“I think you’re the guy that we need,” Freeborn County DFLer Dale Drescher told Feehan, adding he believed Hagedorn would be a “yes man” for Trump.

To bring jobs back to Albert Lea, Feehan said the community needs reliable internet, a full-service hospital and fully funded schools, and pledged to ensure all towns in southern Minnesota have broadband access if he is elected.

“It’s expensive in here to live,” she said.

Good Samaritan Society Administrator Katie Davis said they “need to have a legislator who is going to be an advocate for our residents, for our employees, for our families. Long-term care needs an increase in funding, and so we’re just looking for some leadership at the Capitol for that.”

She said she appreciated Feehan’s visit.

“I’m very appreciative of having him come here today to visit with our seniors,” she said.