Forum points to school board focus 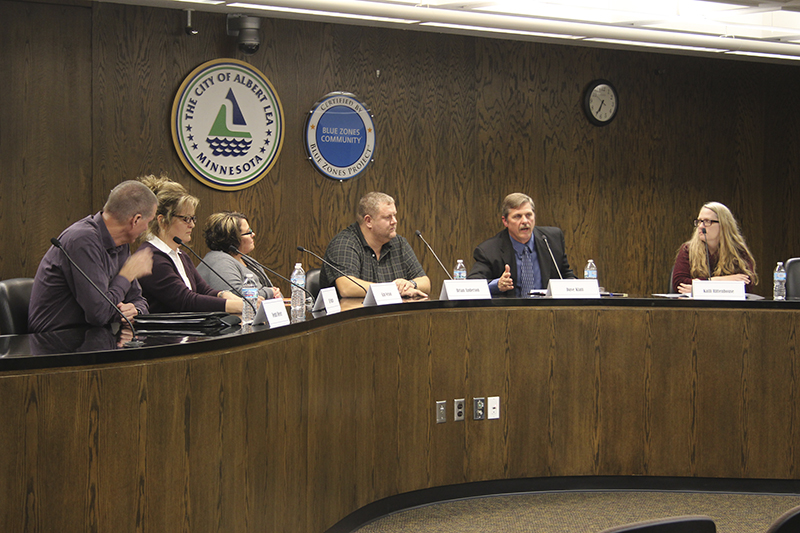 Dave Klatt answers a question for the school board candidate forum Tuesday night. Candidates spoke on their views regarding board cooperation, community relationships and student achievement. - Sarah Kocher/Albert Lea Tribune

Candidates for Albert Lea Area Schools’ four open school board positions took a range of positions at Tuesday night’s forum on solutions for the school board regarding bullying, student needs and civility on the board.

Participants included six of the seven candidates. Dennis Dieser, Kalli Rittenhouse, Brian Anderson, Kim Nelson and incumbents Jill Marin and Dave Klatt attended, while Mark Ciota, who currently sits on the school board and is running for re-election, was not present due to a prior commitment.

Nelson said programs instigated by the community will be the change agent for helping the district meet student needs in this area. Dieser, Klatt and Anderson all cited the Albert Lea Backpack Program, which sends food home with students to cover several meals during weekends, as one such program.

“We know if students are fed well, sleep well, they learn better, and we need to keep focusing on that for our entire community,” Dieser said.

Rittenhouse said better meeting the needs of all students, including those dealing with poverty, means making wise decisions as a board when allocating resources to be sure everyone has an equal opportunity for education.

According to Marin, a large part of helping students includes role-modeling so students can see what their opportunities are. She suggested looking at ways other districts are serving their student populations, and both Marin and Nelson noted the effects poverty can have on social-emotional dynamics in the school.

Marin, Anderson and Nelson all said an app that allows students and staff to anonymously report bullying would be a good tool for the district and to support reporters. Empowering students helps them solve problems with bullying, Anderson said.

For Dieser, counselors in every elementary school makes a huge difference as another line of support for students dealing with bullying.

“We have a long ways to go, but I think we need to keep addressing it,” he said. Dieser suggested bringing in groups and training both parents and children can go together to solve the problems together.

Marin called on the district to enforce its policies to the fullest — including cyberbullying — and on the community to change behavior.

“There is systematic bullying happening in the Albert Lea community, and as a community, we need to focus on that and stop bullying,” she said.

For Rittenhouse, the conversation about bullying is about building community in schools, which she said the district could do by providing more opportunities for clubs and encouraging people to be involved with each other.

Candidates also addressed the current school board dynamic, which Jordal noted has become a point of concern for the community.

“I think that within the board, we need to — and the community — we need to continue to work with respect, and that maybe almost gets back to the bullying issue,” Klatt said. He advocated for better communication before and after meetings, which he said would help the board.

Klatt, Dieser and Nelson all agreed once decisions are made, board members should leave the boardroom united.

While he sees civility as important, Anderson said conflict and disagreements on the board are not always a bad thing, as a board member’s point of view should be informed and guided by his or her constituents’ desires. He noted his past customer service experience — specifically at McDonald’s — as a plus for him in conflict management.

“You might feel like throwing cheeseburgers every once in a while, but usually you’re able to refrain,” he said.

However, Marin said tension on the board goes beyond personality conflict. She said at times the board has engaged in unethical and illegal activities, and that the administration is not accountable to her.

“The incumbents know this, that when I ask a question, it is not answered,” she said.

Marin also criticized the board’s decision-making following a switch to a governance-style board. She said the board has relinquished its place and simply rubber-stamps administrative recommendations.

“The board is the head of the supervisor and the district, and now that we’re a government-style board, it appears that the school board has become an employee of the superintendent,” she said.

According to Anderson, it is important for the school administration not to be too forceful in sharing its view at board meetings — and at the end of the day, it’s more important to listen to what the community says than the other people at the table.

“I know there has been some drama on the school board in past years, and I’m the type of person that can work with people,” he said in his opening statement.

Klatt and Dieser said in order to operate well as a governance board, members need to come to the table with adequate information to make decisions. 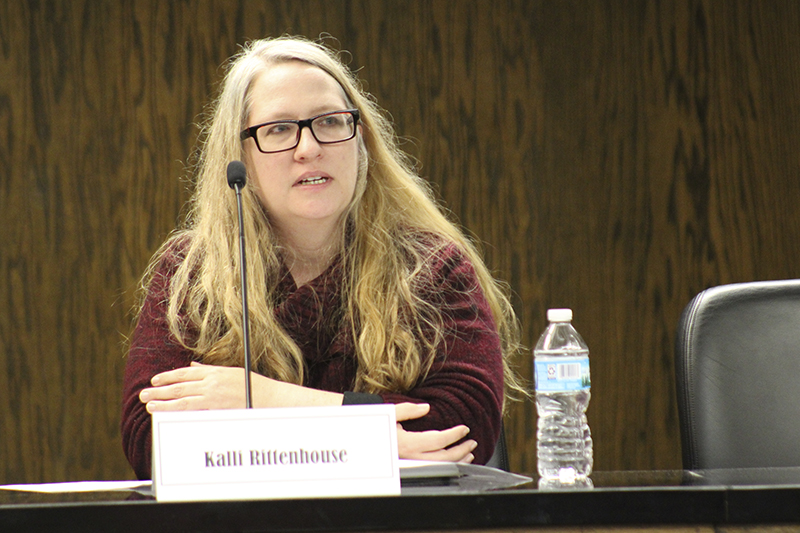 For Rittenhouse, students need information, too, in order to make their own successful decisions about entering the workforce.

“I don’t think we, in general, do a good job in educating our students on what work life looks like,” she said.

She said the district needs to expand the student knowledge base and instill the attitude that learning doesn’t end when students leave school.

“I think success is measured in different ways, and I think being open as a district to whatever success for that person is is what we should be supporting,” Nelson said.

But both Klatt and Marin said the program needs to have more success with its younger targets. These targets include elementary reading levels and kindergarten readiness.

“I think we need to get them ready better sooner,” Klatt said.

However, Klatt said the increased graduation rates are what he’s most proud of from his time as a board member.

Marin said she is most proud of her own ability to stay strong and stand up to bullying, whether it be on the board itself or among students, community members and staff members.

“I’m very proud that I fight against what I believe is unethical, what is wrong, and fight for change for the better because I believe there is a better way,” she said. “What has been happening is not functional and there is a functional way that we can move forward.”

While Anderson, Dieser and Nelson noted the College in the Schools program as an initiative important to them, Rittenhouse said her focus would be on increasing math and reading proficiency rates, which she said set students up for success no matter their path.

For Dieser, the district can delve deeper into supporting children and adults with disabilities.

“It’s just a wealth of opportunities available for us, and the more we can work across the board for all abilities will be great,” he said.

Over the course of the forum, each candidate said their decisions were guided by what would be best for students.

Nelson said she was reminded frequently of something current school board chairman Ken Petersen once said: that your rearview mirror should never be bigger than your windshield.

“We can’t keep looking back on what was done, what might have been done, and make that bigger than the windshield,” she said. “Because we have to look forward.”