Giants no match for the Panthers 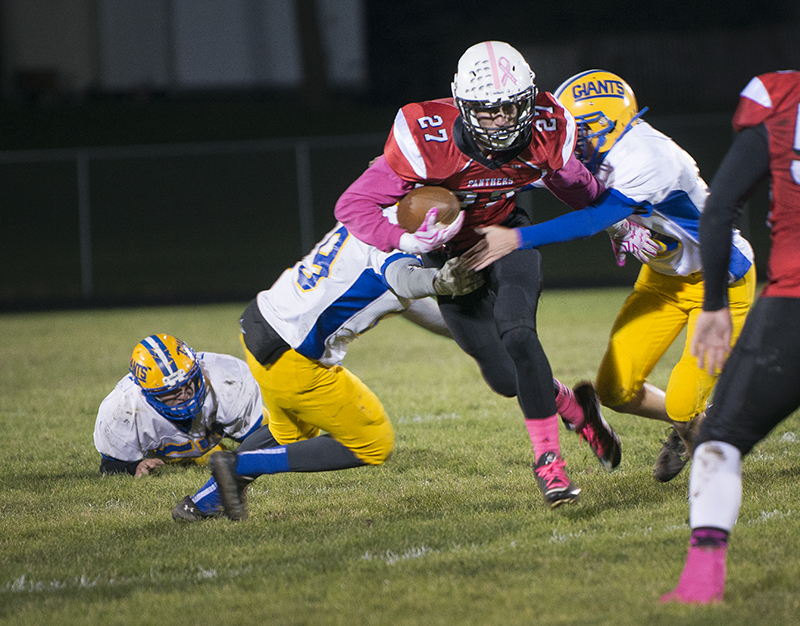 NEW RICHLAND — The NRHEG football team hosted LeSueur-Henderson Friday night in a game to determine positioning in the top half of the section.

The Panthers played a stellar defensive game, returning two interceptions for touchdowns in the first half, and hung on to beat the Giants 28-12.

The Panthers got things started with a bang just one and a half minutes in the game. On a third and long, junior quarterback Blake Ihrke dropped back and fired a ball across the middle to senior Brady Agrimson who took the ball 52-yards in for the score. A successful PAT by freshman Ben Schoenrock put the Panthers up 7-0 early.

The Giants responded by talking the kick return deep into Panther territory, but it didn’t amount to anything as the Panthers defense held strong to force a punt. The Panthers were forced to make their first punt of the game on the next drive, but pinned the Giants inside their own 10-yard line.

On the ensuing drive, junior Lonnie Wilson intercepted a tipped pass and returned it 20 yards for the touchdown. Another good PAT put the Panthers up 14-0 at the end of the first quarter. 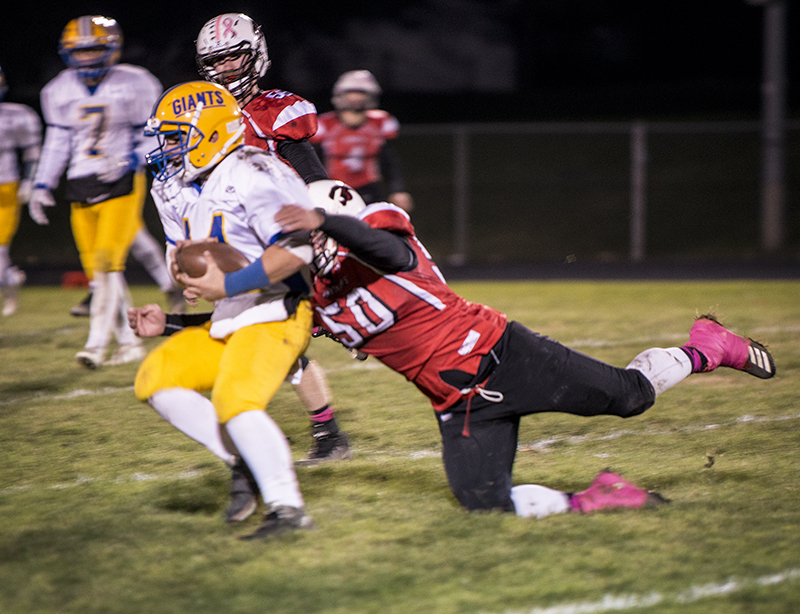 Alex Buckmeier of the Panthers wraps up the Giants quarterback Friday for the sack. – Colleen Harrison/Albert Lea Tribune

It was a quiet second quarter for both teams, with neither one able to make any big plays through the first nine minutes. With just under three minutes to go in the half, the Panthers defense came up strong again when senior Sawyer Vanmaldeghem took another interception into the endzone. This time the return was 50 yards, giving the Panthers a 21-0 lead.

The Giants wouldn’t go to the halftime break empty handed, however, connecting on a 36-yard pass play to cut into the Panthers’ lead just before halftime. The Panthers led the Giants 21-6 heading into the break.

Both teams traded punts back and forth to open the second half, but the Giants were knocking on the door to end the third quarter.

The Giants scored a few plays into the fourth quarter, but a failed two-point conversion kept the Panthers lead at two possessions.

An interception by the Giants deep in Panthers territory put them in fantastic position to score, but once again, the Panthers defense came out on top — forcing a turnover on downs. It looked like the Panthers would give the ball back by punting on fourth down, but a gutsy fake at their own 20-yard line paid off and gave the Panthers a first down.

A few plays later, senior Tyler Jacobson marched in for a four-yard rush to give the Panthers a commanding 28-12 lead. The Panthers would all but wrap up the win on the next drive, when Vanmaldeghem grabbed his second interception of the game.

The Giants would get one more opportunity on offense, but two consecutive sacks gave the ball back to the Panthers to run the clock out.

The Panthers improve to 5-2 on the season and will be back in action Wednesday when they hit the road to take on Lake Crystal-Wellcome Memorial.