The Republican challenger for Minnesota secretary of state is taking issue with state laws governing primary and general elections. 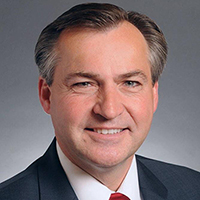 Howe said he wants “open and honest and fair elections.”

“I want every eligible voter to vote,” Howe said Tuesday during a visit to the Tribune. “The key word there is that they have to be eligible.”

Howe said he would advocate for nonviolent felony offenders to be able to vote if they are meeting probationary requirements.

He cited earning a master’s degree in criminal justice and working as a prison guard at the St. Cloud prison for five years as experiences he has with offenders.

“I do believe in second chances,” Howe said. “I do believe that one of the ways that you get people back involved in society is to encourage them to participate.”

He called for general election ballots to be counted if they are postmarked the day of or before the election date and said that should have happened when former U.S. Sen. Al Franken, D-Minnesota, defeated Republican Norm Coleman for the seat.

Howe said participants in the presidential primary must give an oath to the election judge that they will support the party’s nominee, and the party the person votes for will be made public, something Howe does not support. The candidate the voter supports will not be public.

“The current secretary of state supports it,” he said. “I think we have time to change it. I don’t think it’s anybody’s business what party you vote for or who you vote for, and I think it should be a secret ballot.”

To Howe, his time as state senator, Red Wing mayor and in private industry is needed as secretary of state.

Howe claimed Democrats have “weaponized” the Attorney General’s Office and secretary of state during the party’s leadership of the offices.

He said he does not support only civil remedies for campaign finance violations.

“Working with the Attorney (General’s) Office and working with the legislative body, we need to change our laws to put some teeth into our campaign finance laws,” Howe said.

He said Simon “defied” a Ramsey County judge order to release challenged voter data and appealed the ruling, causing it to not be able to be released until after next month’s mid-term election.

Howe said voters whose identities have been challenged need to prove their identity to ensure voter fraud is not taking place.

He said the secretary of state should recruit businesses to locate to Minnesota.

“We are not a very tax-friendly state,” he said.

Howe said the state should utilize the National Guard and Minnesota Information Technology to improve cyber security, and he advocated for security increases within the Minnesota Licensing and Registration System.