Initiative is not over yet 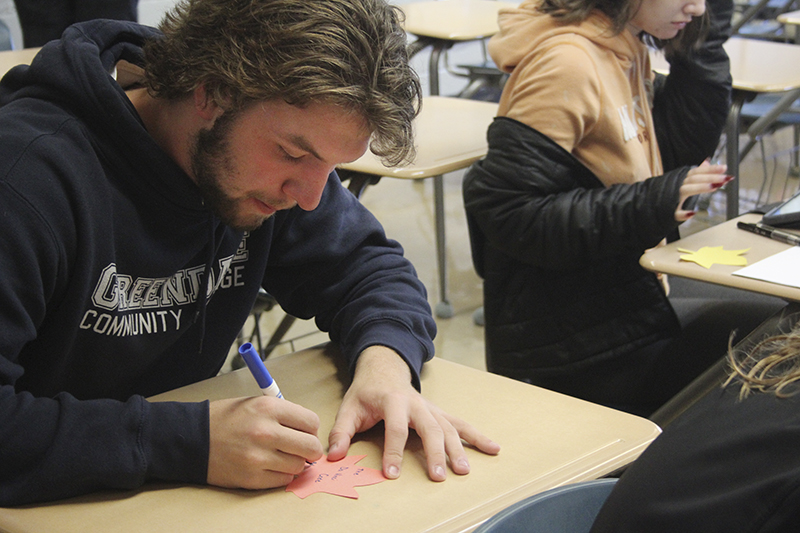 A Glenville-Emmons senior writes one of the books so far, Dan Brown’s “Da Vinci Code,” onto a leaf. English teacher Aniko Eastvold will add the leaves to a paper tree in the back of the classroom dedicated to The Great American Read. - Sarah Kocher/Albert Lea Tribune

GLENVILLE — Though The Great American Read came to a close Tuesday for PBS, at Glenville-Emmons High School, it’s not even close to over.

English teacher Aniko Eastvold has her ninth- through 12th-graders competing to read the most books off the list through May in an effort to harness excitement about reading. She was inspired after getting involved in Albert Lea Public Library’s summer program.

“It doesn’t have to end in October,” she said.

Eastvold borrowed PBS’s list of the 100 books included in the read and has encouraged her students to read those books during free reading time on Fridays.

In class, her seniors just finished reading “A Separate Peace” by John Knowles, which shares the story of two boys in a New England boarding school set during World War II. Eastvold said she has taught the story before and was planning to teach it again, but bumped it up in the school schedule to coincide with the read. 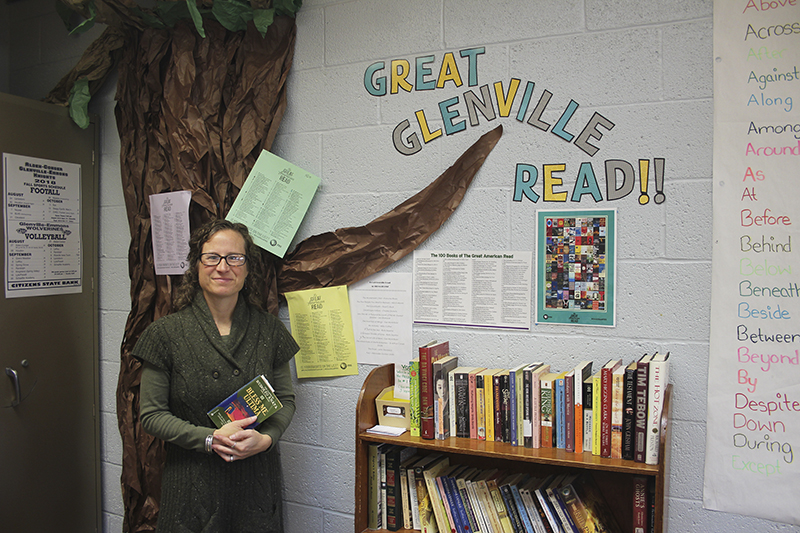 Glenville-Emmons high school English teacher Aniko Eastvold has extended The Great American Read for her students, encouraging them to compete reading books off the list of 100 through the end of the school year. – Sarah Kocher/Albert Lea Tribune

Eastvold has shown clips of the PBS episodes in class, and that’s what has gotten the students most excited for the read, she said.

“Those are the times that I’ve noticed kids light up,” she said.

And then, after the clip has ended — “Do you have that book?” (For instance, Betty Smith’s “A Tree Grows in Brooklyn.”)

“It’s been fun to see them get excited,” she said.

Students at the high school are competing in several ways during what Eastvold calls The Great Glenville Read. Students voted for what they expected to be named the No. 1 best-loved book in America. Individuals are also competing to read the most books off the list between June 2018 and May 2019, and grades are competing against each other — and the teachers — to see who reads the most on the list (previously read books count in this competition).

Eastvold said she picks up books from the list when she sees them at the Salvation Army or a used bookstore to have in her classroom. Senior Zoe Gerlach said the Southeastern Libraries Cooperating system has also helped students get the books in their hands. They can ask someone at the school to order the book through the system, and senior Faith Attig said they come quickly. 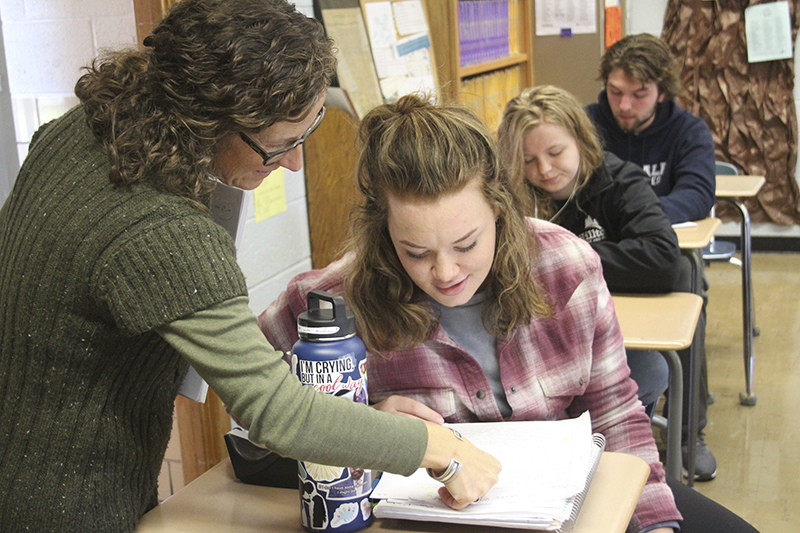 Senior Faith Attig and English teacher Aniko Eastvold look over an essay Attig wrote about an assigned read — and one of The Great American Read books — “A Separate Peace” by John Knowles. – Sarah Kocher/Albert Lea Tribune

Gerlach’s favorite book off the list is “The Outsiders” by S.E. Hinton, and her next check-mark on the list is J.R.R. Tolkien’s “The Lord of the Rings” series. Attig is about to start “The Da Vinci Code” by Dan Brown. Her favorite of the 100 books is “The Help” by Kathryn Stockett.

Of her 45 ninth- and 10th-grade students, 16 are reading books off the list for their free read, Eastvold said. Some of the students are collaborating, too — planning their picks with others so they can spread out the readers to as many titles as possible.

As of Tuesday morning, the 12th- and 10th-graders were tied for most books read off the list with 35 titles checked off. The list is actually a few titles longer than the 100 chosen by PBS, as Eastvold prepared alternate titles for some books she didn’t feel were age-appropriate reads.

Eastvold herself is working on “Bless Me, Ultima” by Rudolfo Anaya. She has already finished the title her students voted for her to read: “Gone Girl” by Gillian Flynn.

Gerlach said The Great Glenville Read has been a chance to see what people in different areas enjoy, and she’s grateful for the extra time to read them.

“It opened my mind up for more books to want to read to get into new genres, ” she said. 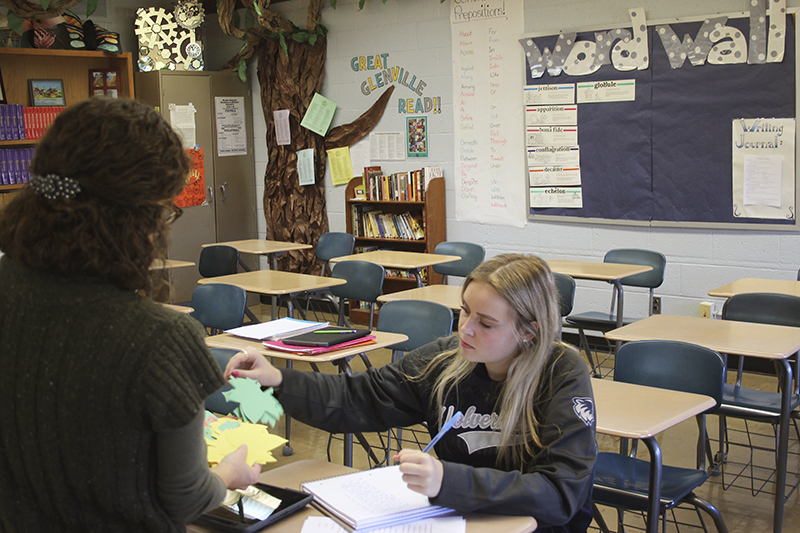 Glenville-Emmons high school English teacher Aniko Eastvold passes out leaves to students, on which they can write a book they’ve read to add to their Great Glenville Read paper tree in the back of the classroom. – Sarah Kocher/Albert Lea Tribune