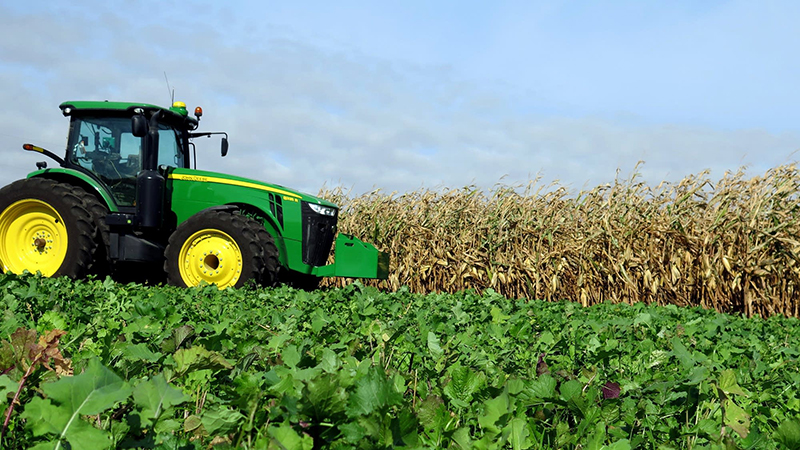 One of Joel Rauenhorst's tractors sits in a field of overgrown cover crops, including radishes and turnips, Sept. 24 at his farm in Easton. Smaller versions of the cover crops are growing in between the rows of corn. - Elizabeth Dunbar/MPR News

Congress has missed its deadline to reauthorize the farm bill, the nation’s primary doctrine for guiding and funding agriculture and food policy.

Programs like CSP can provide major benefits to the environment and help mitigate climate change, which poses increasing threats to farmers.

Extreme rain and flooding happen more often as the climate warms, and either can kill a crop. And the longer growing season is bringing more pests, weeds and disease.

But agriculture is also one of the biggest contributors to climate change.

Half the world’s emissions of methane — a potent greenhouse gas — come from agriculture. Converting landscapes like prairie, forests and wetlands into cropland reduces its ability to store carbon, another greenhouse gas. Major crops require intensive plowing, stirring up the soil and further reducing the land’s ability to sequester carbon.

Farmers want to be good stewards of their land, said Matt Perdue, government relations representative for National Farmers Union, but it’s difficult for them to pay for things like cover crops or land restoration.

“The reality is that farmers just don’t have enough cash on hand to install a lot of these practices on their own,” Perdue said. “In the long run what we’ve seen is that there are lot of economic benefits to reducing tillages to utilizing cover crops to doing a lot of climate-friendly practices”

The Conservation Stewardship Program includes over 70 million acres of agricultural and forest land. It pays the landowners for improving wildlife habitats or implementing environmentally agricultural practices like climate-friendly no-till farming or cover crops.

The Senate bill would cut funding for the CSP. The House bill would eliminate it, rolling some CSP funds into the smaller Environmental Quality Incentives Program.

Overall, Rep. Tim Walz, D-Minn., wrote in The Hill that the House bill would cut $5 billion in funding for working lands conservation programs.

For Perdue and climate advocates, one bright spot in the Senate’s farm bill is the addition of language for weather volatility adaptation and mitigation.

However, he isn’t sure the farm bill as a whole is shifting to a “climate-friendly” model.

“I don’t know that we’re seeing a wholesale shift in the structure of the farm bill,” he said, “but I do think that there’s an increasing acknowledgment of agriculture’s role in addressing climate change.”