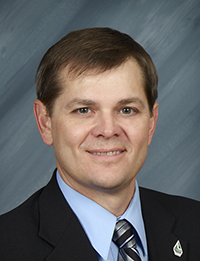 “The challenges to maintain our quality of life has to be met with growth of our tax base,” Rasmussen said, who is being challenged by George Marin for his fourth term as mayor. “First, we must maintain and improve our infrastructure to make Albert Lea safe and easy to use. This will be accomplished by a committed capital improvement plan that deals with needs and financing of those needs.”

To Rasmussen, the city needs to evaluate how it can create chances for industries and families to build in Albert Lea.

He said the city needs to have a “team approach to growth.”

“We have to continue reaching out to the community to find ideas for future growth,” Rasmussen said.

Rasmussen, 54, said the city has “made a conscious effort to balance the tax impact on our citizens.”

“Building a system that understands how to move forward without burdening the citizens is a point of emphasis,” he said.

“These plans will be important to our progression but also have to be constantly monitored and adjusted as situations dictate,” he said. “I feel that we have to continue investing in our infrastructure needs so we are allowing growth to happen.”

To Rasmussen, the only way the city can maintain services responsibly is by community growth.

“We have to continue finding tools that allow for the private sector to build tax base,” he said. “The increase in tax base will offset the natural increases caused by inflation.”

Rasmussen called flooding “one of the major concerns for our community.”

Flooding in 2016 temporarily closed East Main Street, and sections of the community are sometimes not passable due to heavy rain.

“Our greatest asset — lakes — is also one of our greatest challenges,” he said. “We will have to be dedicated to looking at every chance to decrease the problem of water.” He added that could include partnering with the Shell Rock River Watershed District, improving the city’s waste treatment system and slowing water runoff.

“We have to be committed to the goal of reducing flooding in our community, because it affects all of us,” he said.

To Rasmussen, though programs sponsored by local groups “are a great start,” the city needs to continue to have a positive business climate to encourage business growth and entrepreneurship.

“From permitting, to signage, to zoning, we have to show Albert Lea is open to new business, we are willing to work with entrepreneurs,” he said.

“Save Our Healthcare has been instrumental in raising awareness of the challenge we face,” he said. “Freeborn County and the city of Albert Lea all have a role in solving it. The solution must be what is right for the citizens of Albert Lea in both the short term and the long term.”

“We can never completely deal with the challenges, but we have made a significant investment over the past several years,” he said. “Having a well-planned program to deal with both the infrastructure needs and financing is of the utmost importance.”

To Rasmussen, the city needs to always prioritize transportation projects to maximize the impact.

“Finding all the resources that are available to fund projects through the state and federal government will enhance our local buying power,” he said. “The only way to deal with road concerns is to be consistent with our commitment to a plan that extends the life of existing roads and uses new technologies to build roads in the future.”

“This has allowed us to see problems coming, address those with the state Legislature, the community impacted, or prepare city and county leaders for those problems,” he said. “The plan changes and evolves but provides long-term direction.”

“There are parts of the community that aren’t as involved as we all want,” Rasmussen said. “Our surveys show citizens don’t feel they are listened to or their feedback is appreciated. We have implemented different forms of communication to reach those pockets, but we have much more work to do.”

To Rasmussen, his greatest asset is bringing groups together to solve “tough issues facing a small, rural community.”

“Bringing groups together to fight those challenges is essential,” he said. “A mayor acts to find partnerships between different groups of citizens to find win-wins for all citizens.”

For the city as an employer to attract employees, Rasmussen said it has to “provide competitive wages, meaningful work, work that contributes to a larger goal and the ability to grow as an employee.”

“If our children want to work for the city, that’s what we would want for them,” he said.

“It validates the steps the city has been achieving,” he said.

To Rasmussen, “communication is the single biggest challenge of all organizations.”

“Building a strong relationship with Freeborn County and all surrounding communities will only make us all stronger,” he said. “We must continue to be open to the concerns and questions of each board without judgement.”

Rasmussen noted routine joint meetings between the two boards exist, adding they should be continued, as open dialogue improves their understanding of each other.

“We could do a better job of setting joint goals,” he said. “This would allow each board to understand where we are able and willing to work together before issues arise.”

Rasmussen said the community needs to focus on relationships with state officials.

“There are many financial demands that the state of Minnesota places on municipalities,” he said. “Building relationships with our state representatives helps to make sure our concerns are heard.”

“These changes will place unrealistic costs on our treatment plant that will cost all of us millions of dollars,” he said. “Working with our state representatives will help to answer some of these questions.”