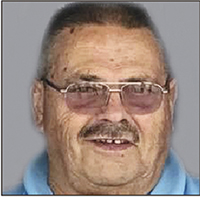 Nubbs was born April 1, 1941, at home in rural Wells. He was the son of LeRoy and Helen (Dombrowski) Wilder of Wells. He attended first through eighth grade at St. Casimir Catholic School in Wells. He graduated from Wells Easton High School in 1960. He was proud to serve his country and entered the Army immediately after high school. He was deployed June 1960 to June 1962 in Germany during the building of the wall in the Berlin crisis. He married his high school sweetheart, Kathleen Warmka, on June 24, 1964. They were blessed to have four fine sons: Philip, Paul, Patrick and Jeff.

He worked for Richter Hardware in Conger for six years fixing wells. Then he started working for Freeborn County Highway Department in April 1968. He loved working outdoors. He took pride in his work and always did the job right the first time. He was the backhoe operator for the first 25 years. They used to say he could pick up a dime with the backhoe. For the last 15 years before he retired, he mowed road ditches in the summer and drove the Oshkosh plowing snow in the winter. He was always proud to say he worked for Freeborn County for 40 years.

Nubbs was a member of St. Theodore Catholic Church in Albert Lea, Knights of Columbus, American Legion Post 404, Moose Lodge, Legion of the Moose and Eagles. He was active working with kids all of his life. He was Cub master and Scout master for St. Theodore’s Troop 105 Boys Scouts of America for 20 years and a foster parent for over 101 kids over a 35-year period in Freeborn County.

After retirement he continued his hobbies of fishing on Leech Lake, playing bingo and making stained glass lamp shades for gifts. With a great love for farming, he was blessed to be able to return to the farm for spring planting and fall harvest. Year-round he was a sports fanatic! He loved and watched every kind of high school sport that Albert Lea Area School District had. The sport that was dearest to his heart was wrestling. He got hooked on wrestling in the ’80s when his oldest son, Phil “Bruno,” started wrestling. He was a faithful fan from then on. A highlight of each summer was always Cousin’s Camp, where he was waterfront director for his grandkids and grand-nieces and nephews who came to Camp Wilder.

He is survived by his sons Philip Wilder (Saralyn) of Austin and their children Zach (Mallory), Katie, Drew (Cassy), Natalie, Ellie (Tony), Mitchell and Eric; Paul and Ellie Wilder of Faribault and their children Louis, Sarah, Teresa, Emily and Monica; Patrick Wilder of White Bear Lake and his children Jake and Tess; and Jeff Wilder and his children Anthony, Noah, Carlito and Mia. There are seven great-grandchildren; one brother, Marvin Wilder, of Albert Lea; and two sisters, Ann (Gene) Utzka of Albert Lea and Jeanette (Dennis) Wilder of Kiester. He is also survived by sisters-in-law and brothers-in-law James Warmka, Margaret Barrett, Rosemary Cavidini, Tom (Cheryl) Warmka, Jeri Warmka, John (Carol) Warmka and Dan (Deb) Warmka; and numerous nieces and nephews and great-nieces and nephews.

In lieu of flowers, donations are preferred to St. Jude’s Hospital.