‘Our hearts are broken’ 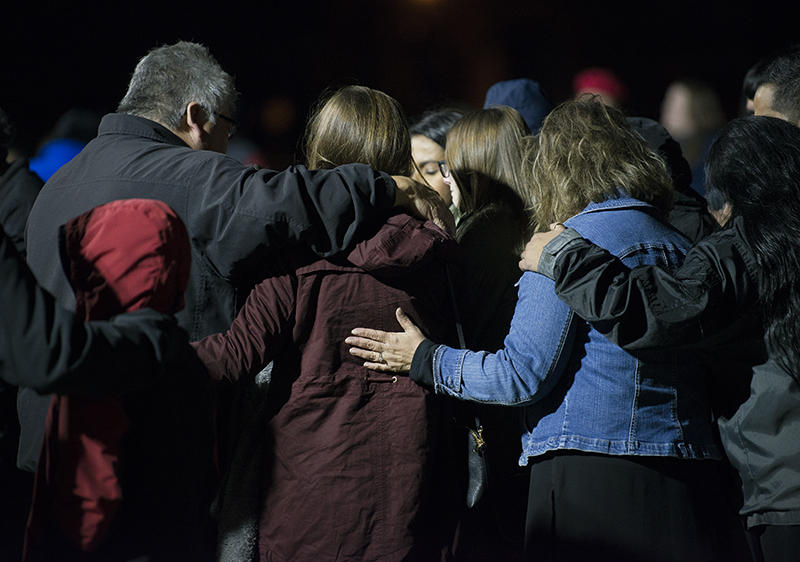 Community members comfort each other and pray together as people gather at Morin Park Friday to remember Pla Mo, an Albert Lea High School student who took his life earlier this week. - Colleen Harrison/Albert Lea Tribune

Bundled in coats and blankets, more than 200 people of all ages and backgrounds gathered at Morin Park Friday to remember the Albert Lea High School student who took his life earlier this week.

Pla Mo, 14, was a ninth-grader who enjoyed gaming and who dreamed of one day being a police officer, his sister Mu Hsi, 15, said.

She described her brother as her best friend, who was a happy child when he was younger, and recalled a time when they made hot chocolate and watched “Cinderella” on a snowy day.

Though he was her younger brother, he was always there protecting her, she said, and she wished she could have been there for him the night he died.

“Tell your loved ones you love them before it’s too late,” she said. “Let us be strong and show people there’s more good than bad in this world.”

The gathering, organized by residents Kiara Espinosa and Juan Vega, was led by the Rev. George Marin of Grace Christian Church.

“These two young people felt compelled to assist the family in fundraising and support and also wanted to bring awareness to the topic of bullying and the ill and devastating effects that bullying can have,” Marin said prior to the event. 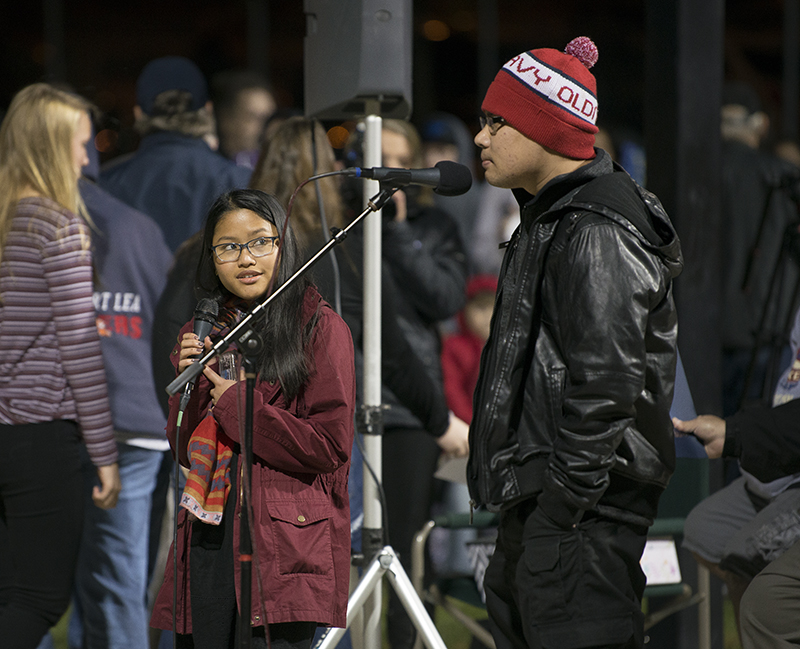 Marin said he and his wife, Jill, who is a licensed counselor, were invited to be a part of the event because of their leadership in helping the community process other instances of deaths involving suicide.

“Our hearts are broken for this precious family,” George Marin said.

He said they visited with Mo’s family for most of the day Thursday, and the family showed support for bringing awareness of suicide and bullying during the event. The family is part of Albert Lea’s Karen community.

Jill Marin spent a few minutes talking about bullying during the gathering and said people should remember the common phrase of “stop, drop and roll” that is often associated with fires when standing up to bullying: Stop hurtful words, drop bad actions and take action against bullying.

She asked whether people would walk away from the evening and forget about it in a few weeks or say this was enough and bring change. She said adults must respond quickly and consistently to incidents of bullying to make a difference.

Jill Marin, who lost her 16-year-old brother to suicide, said there are resources available for anyone who feels like taking his or her own life, one of which is a crisis text line. She said people can text “connect” to 741741 to speak with a trained crisis counselor.

Sa Ba Taw, an associate pastor in the Karen community, encouraged people to ask questions when they see someone who is depressed or lonely and to make friends so that people know there is someone who loves them and supports them.

“We are here for one another,” Taw said. “We have to love one another. We cannot live alone.”

The Rev. Dan Mueller of Austin, who works with many multicultural groups, talked about the need to stand side by side with those dealing with depression and loneliness.

“As we stand as one, those things can be dealt with,” Mueller said. 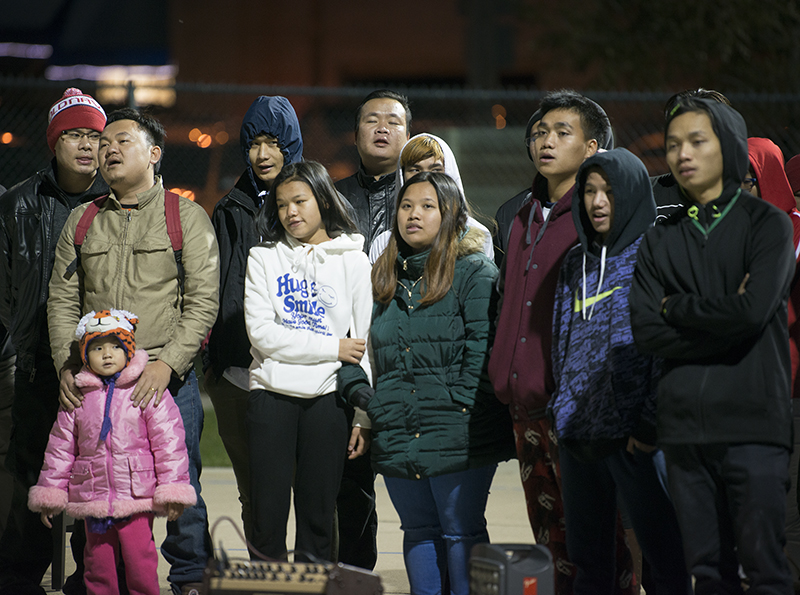 In addition to the remarks, those in attendance heard two songs from Elisha Andrew Marin and one song from a group of about 30 Karen youth.

Prior to the event, George Marin talked of the need for increased cultural sensitivity and for being kind and neighborly to all community members.

Members of the Karen community have lived in Albert Lea for about a decade after fleeing from war-torn Burma and refugee camps in Thailand. Coming out of those situations and into a new culture and new language, the Karen have worked diligently to assimilate.

Marin said the loss of Mo is a “tremendous, irreplaceable loss for this family and for our entire community.”

“This one loss of life is hugely significant in the narrative of our times right now,” he said.

“It’s a failure on all of our part, and it’s an opportunity for growth.”

At the gathering, Marin read a statement from District 27A Rep. Peggy Bennett, who was unable to attend because of a prior engagement.

She said her heart goes out to Mo’s family.

“When one member of our community hurts, we all hurt,” Bennett said.

“Our school district is devastated by the loss of Pla Mo. Along with the high school administration, I met with Pla’s family to offer our condolences on behalf of Albert Lea Area Schools. It is important for our school system to come together with our families and community partners to support the needs of our students during this difficult time.”

Help into the future

Sandy Clover, occupational health nurse and health and wellness manager at Albert Lea Select Foods, where Mo’s mother works, said Friday morning there has been a definite shift in the mood among the company’s employees this week upon hearing of the teenager’s death.

Clover estimated about 300 Karen people work at the business, and she described them as a “tight-knit family in this area.”

She said the company put up a donation box for the family, and it also plans to make a donation to help the family with time off work and other expenses.

In addition, she hopes to work with Ann Austin, executive director of United Way of Freeborn County; Karen religious leaders and others in case there are concerns or worries that their employees need to talk about. She also wants to be able to provide information to the employees about what to look out for in regards to depression and suicidal thoughts.

“I want them to know that as a company, we do care and we want to help them in any way we possibly can,” Clover said.

In addition to donations being accepted at Select Foods, donations are being collected for the family through a GoFundMe page to help with funeral arrangements at https://www.gofundme.com/bmvag-help-raise-money-for-funeral. 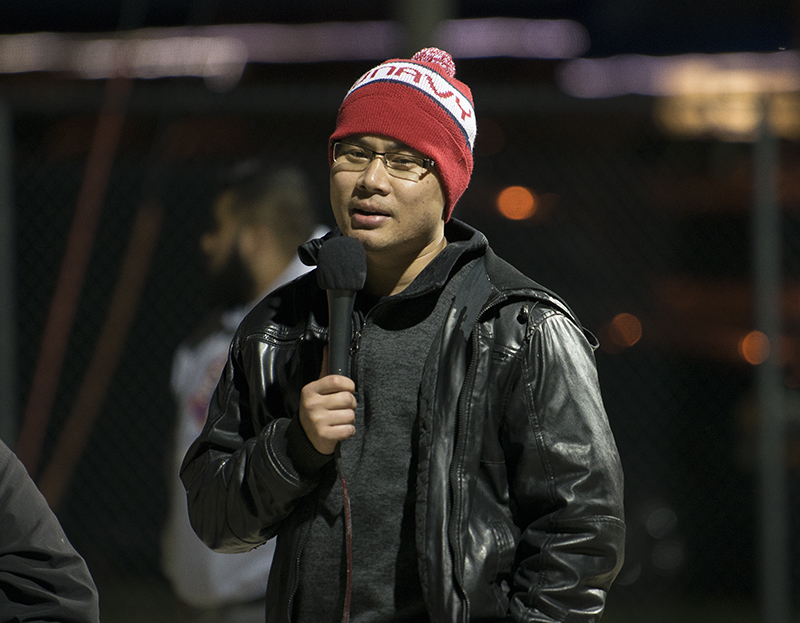 “We are here for one another,” Sa Ba Taw said during Friday’s gathering. “We have to love one another. We cannot live alone.” – Colleen Harrison/Albert Lea Tribune