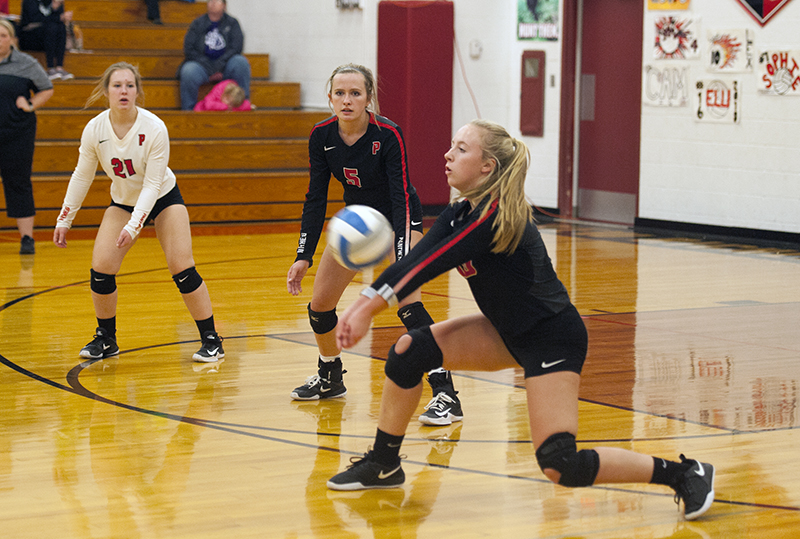 NEW RICHLAND — The NRHEG volleyball team hosted ML-GHEC-T Monday night in the first round of the Section 2A tournament.

The Panthers came into the match with little doubt in their minds and crushed the Jaguars in a straight-set victory, 3-0.

There was no time wasted by the Panthers starting the first set. They jumped out to a fast 10-3 lead thanks to stellar serving from seniors Sydney Schlinger and Olivia Christopherson. Christopherson was also a force at the net, throwing down multiple heat-seeking kills, prompting “hammer” chants from the student section.

The Jaguars were plagued with misplayed balls throughout the first, allowing the Panthers to handily take the first set 25-12. 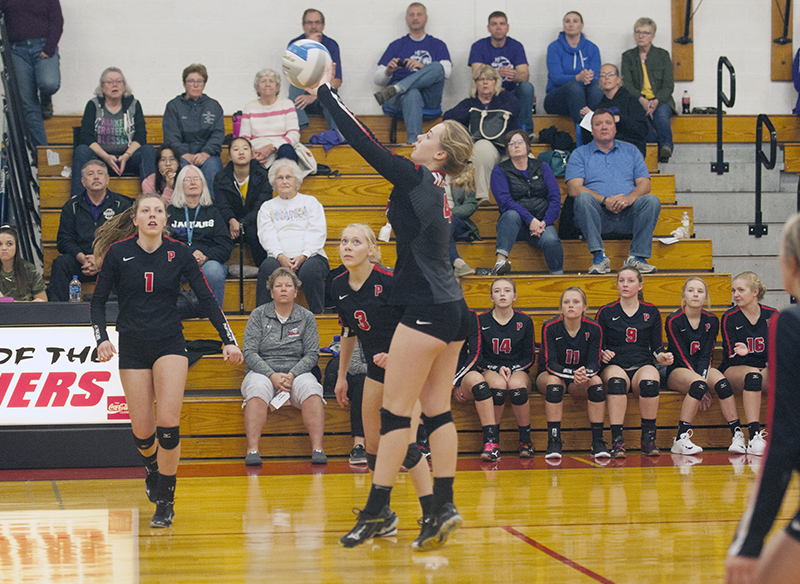 NRHEG senior Jayna Finseth keeps the ball alive Monday night against ML-GHEC-T. The Panthers advance to the second round of the Section 2A tournament, where they will face Mountain Lake on Thursday. – Tyler Julson/Albert Lea Tribune

The Jaguars weren’t about to let the Panthers run away with the entire match, however, as they became much more competitive in the second set. Early in the set, the Jaguars led by as many as five points and were on top 17-15 late. However, the Panthers found their footing and cruised with a 10-2 run to take the second set 25-19.

The third set was also competitive throughout the early stages. A big kill from senior Kylie Andt to kick off the set sent a wave of momentum through the team and boosted them to a 10-8 lead. Two long volleys that saw the ball going through the rafters on multiple occasions were won by the Jaguars, giving them a small surge. However, a couple big serves from senior Laura Worrell had the Jaguars reeling to stay in the match, eventually falling to the firepower of the Panthers 25-16.

Christopherson led the team with 14 kills, and also recorded three digs, three aces and one assist. Senior Alexis Anderson and Worrell had six digs each and Schlinger had five. Worrell led the team in assists with 14; senior Hannah Budach was close behind with 12.

“Great to get the first playoff win,” said head coach Onika Peterson. “We came out extremely strong in set one, leading the whole game. We came out a little slow in set two and put ourselves in a 6-8 hole. Set three, the girls played with confidence and capped off the night with a great win. I am proud of the girls and we are looking for our next playoff win on Thursday.”

The Panthers advance to play at 7 p.m. Thursday in Mountain Lake.