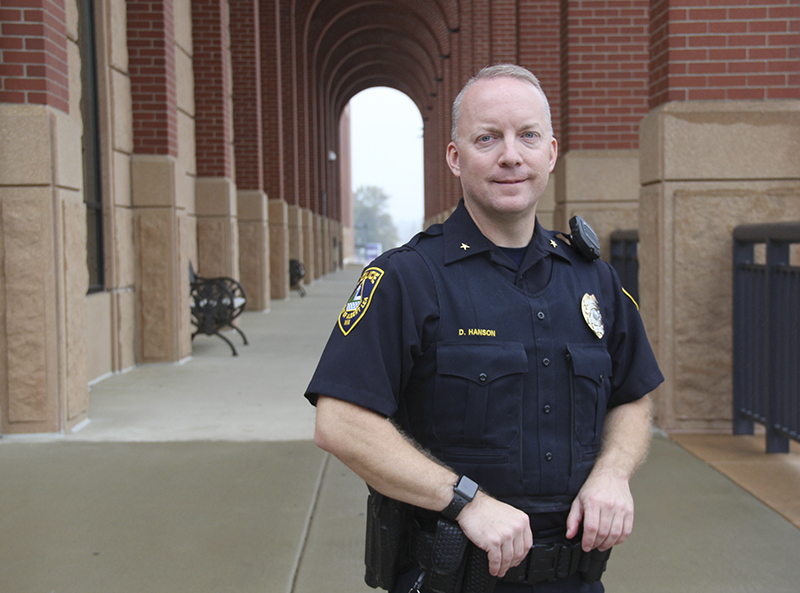 Darren Hanson is the new deputy chief for the Albert Lea Police Department and has worked for the department since 1995. - Sarah Stultz/Albert Lea Tribune

After starting at Southwest Minnesota State University in the early 1990s with hopes of becoming a teacher, Albert Lean Darren Hanson soon realized that path wasn’t for him.

Hanson, 46, said he quit school and worked at Farmstead Foods for a year when an Albert Lea officer offered to take him on a ride-along.

“I did, and I was hooked,” Hanson said. “It was a job that appealed to me — the crazy hours and being outside.”

That ride-along changed the course of Hanson’s life as he then decided to pursue a career in law enforcement.

Now, 24 years after graduating with an Associate of Science degree in law enforcement from Alexandria Technical and Community College, Hanson has been promoted as deputy chief of the Albert Lea Police Department.

Before coming to the Albert Lea Police Department, Hanson started his law enforcement career as chief of police of the small community of Bridgewater, South Dakota, for a year.

He started as a patrol officer in Albert Lea in 1995 and was promoted to lieutenant in 2007. He said he has been involved in most areas of the department over the years, including the SWAT team, bike patrol and field training.

Hanson started out working the afternoon shift — from 5 p.m. to 3 a.m. — but in recent years has worked the day shift. He graduated from Purdue University Global with a bachelor’s degree in May.

Hanson said his new position as deputy chief focuses on making sure officers have the equipment, training and resources they need to do their job.

There are presently 27 sworn officers in the department — with plans to hire a replacement for one officer position that is open. There are also two community service officers, an administrative assistant and 10 reserve officers who help out at community events.

Hanson said with the recent promotions of Carlson to director of public safety and himself to deputy chief of the Police Department, one of the immediate goals for the department is to focus on team-building and making sure everyone understands expectations in the department.

“Law enforcement is evolving,” he said. “Over the last 15 years, it has become more service-based.”

The department will continue its community policing efforts already established and seek to be involved in the community.

Another goal, he said, is to become more engaged with crime-free rental housing. This will work for the benefit of both the renters and landlords.

Presently the crime-free rental housing program is voluntary, but the department may look into having it be required for all rental properties.

It’s important to provide the people who are renting a safe, comfortable and secure place to live, and it also helps landlords know what to expect from their tenants, Hanson said.

Interesting fact: has been able to coach all three of his children during their soccer careers