Prairie Profiles: ‘You need a team’ 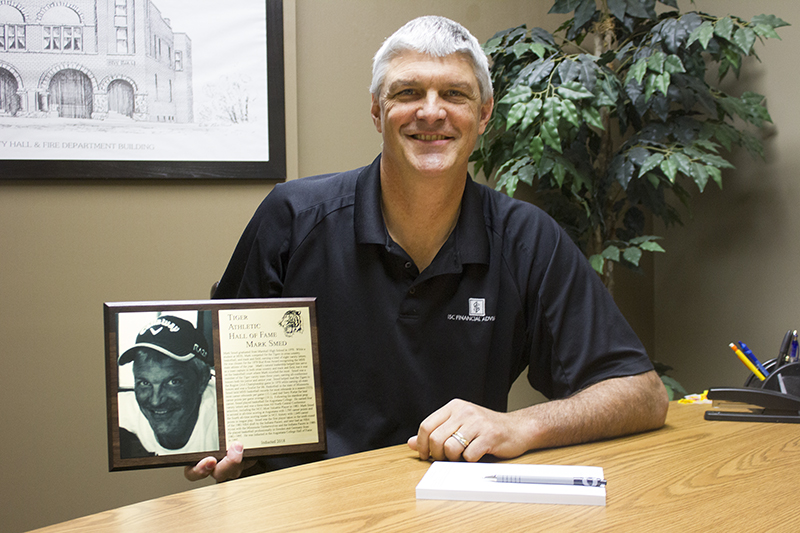 An Albert Lea man was recently inducted into his second athletic hall of fame.

Mark Smed, 57, was inducted Oct. 13 into the Marshall Tiger M Club Hall of Fame based on his accomplishments in cross country, track and field, and basketball — a sport in which he was a finalist for Mr. Basketball in the state of Minnesota in 1979. He was inducted into the Augustana University Hall of Fame in 1995.

“It is an honor and it is something that happened a long, long time ago, but you always have good memories of just your teammates and coaches and all of the people that helped you get through that, because you can’t do it yourself,” he said. “You need a team.”

Smed, who served as team captain in track and field and cross country in high school, is best known for his accomplishments in basketball, a sport he later played professionally from 1983 to 1995 in Europe.

Smed earned eight varsity letters in his high school athletic career. He was chosen for the 1979 Bud Rose Award, symbolizing the Marshall High School Male Athlete of the Year. A two-time All Conference selection, Smed led the Tigers to the Region 2AA championship in 1979, earning All-State honors. He held Tigers records for rebounds in a year (333), career rebounds per game (15.1), and tied school great Terry Porter for career points for average (19.3).

Smed earned four varsity letters at Augustana and was a three-time All North Central Conference selection, as well as the conference Most Valuable Player award in 1983.

Smed finished his collegiate career second all-time in scoring at Augustana with 1,795 points and fourth in conference history with 1,049 career points in league play.

Smed was selected with the first pick of the 10th round of the 1983 NBA Draft by the Indiana Pacers. He tried out with the Minnesota Timberwolves and Indiana Pacers in 1989. He played basketball professionally in Ockelbo, Sweden, from 1983 to 1986 and Oldenburg, Germany, from 1986 to 1995.

“It was a great opportunity to get to live in a couple different countries,” Smed said.

Smed and his teammates helped deconstruct the wall after a game.

At 6 feet, 8 1/2 inches tall, Smed played center in high school and forward in college. While in Europe he played in the paint and from outer ranges depending on who he was going up against.

In Europe he competed against Arvid Kramer, who also played at Augustana and was a 1979 NBA draft pick.

“He would come a day or two before the game, and then he would stay at my place,” Smed said. “And we’d beat each other during the game and then stay another night.”

Smed, who married his wife, Karen, in 1985, spoke of the experiences they had together on the continent.

“My wife was with, so we got to travel a lot,” he said. “We got to experience the culture, got to really meet sponsors, the fans — just really were embraced by the community.”

Today, Smed is a registered financial representative at ISC Financial in Albert Lea.

Smed, who has played organized sports for more than 40 years, credited his longevity to his drive to succeed.

“That’s why I was able to play so long, because I really enjoyed practice, just getting together with the guys and competing,” he said. “I think you need to enjoy whatever you’re doing to make it work.”

Interesting fact: Smed enjoys coaching basketball and led a team of 13-year-old boys to the Swedish National Championship in 1985