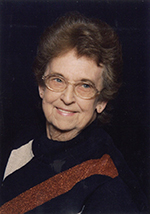 Funeral services will be at 2 p.m. Friday at Silver Lake Lutheran Church in rural Northwood. The Rev. Randy Baldwin will officiate. Burial will be in Silver Lake Lutheran Cemetery. Visitation for Rose will be from 5 to 7 p.m. Thursday at Mittelstadt Funeral Home, 902 E. Main St., and will continue one hour prior to the service at the church Friday.

Rose Marie (Stavnesli) Henderson was born Jan. 16, 1931, at the home of her parents Helmer and Amanda (Olson) Stavnesli in Manly, Iowa. She attended school in Manly and was involved in many church activities at both Bristol and Silver Lake Lutheran churches throughout her entire life.

On Aug. 31, 1947, she was united in marriage with Ardell Harlan Henderson in Albert Lea. They were lifelong residents of the Silver Lake and Lake Mills area, where they raised their four children. They were married for 45 years when Ardell passed away in 1992.

Rose worked for Winnebago Industries in Forest City and retired after 23 years in 1994. She was very proud of her Norwegian heritage and loved her family dearly. If she wasn’t spending time with family or helping others, she could be found reading books and doing crossword puzzles. Her flowerbeds and bird feeders were always kept full, and she was a passionate animal lover making furry friends everywhere she went.