Memorial services for Rudolph (R.J. “Jim”) Olivero will be at 11 a.m. Monday at First Lutheran Church in Albert Lea. The Rev. John Holt will officiate. Interment will be in Graceland Cemetery. Visitation will be from 3 to 6 p.m. Sunday at Bonnerup Funeral Service and one hour before the service at the church. 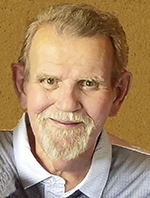 He was born July 19, 1945, at West Point in Highland Falls, New York, the son of John and Beatrice (Herrick) Olivero. Jim graduated from Highland Falls High School, then continued his education at Rocky Mountain College in Billings, Montana; Lea College in Albert Lea and then graduated with a business degree from Mankato State University. He later returned to classes at Riverland Community College, obtaining his COTA certificate from Mankato State.

He married his soul mate, Pamela Berges, on Nov. 16, 1968, at Christ Lutheran Church in Preston and they were blessed to have just short of 50 years together.

He began work at Streater in the business office in Albert Lea, but decided he needed more direct contact with people. For more than 30 years he worked at REM/Woodvale as a QMRP. After retirement the family continually heard “The Wheels on the Bus,” as he purely enjoyed his years driving school bus.

A great community advocate, Jim served as a Freeborn County commissioner for eight years, was a guardian ad litem for many, served on the Solid Waste Management Board and was active in volunteering with The ARC, the YMCA, Salvation Army and the Jaycees.

He was a faithful member of First Lutheran Church, where he served as Sunday school teacher, confirmation leader and usher.

Jim was a gentle giant, but yet a driving force who never made judgment but always quietly said “You know what you need to do.”