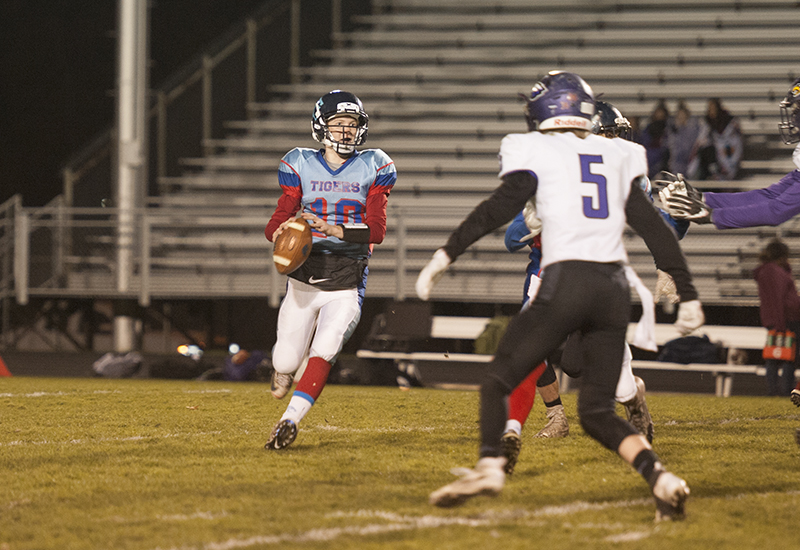 Despite falling into an early 12-point deficit, the Tigers scored 39 points the final eight minutes of the first half to crush the Wingers and get their first home playoff win since 2007, 52-24.

Neither team was able to score on their first possessions. The Tigers got a big boost of momentum when they recovered a fumble early in the Wingers’ second drive, but were unable to capitalize when a fourth down pass just missed the mark.

Albert Lea buckled down on their next drive, however, when junior JJ Mucha Owens got the Tigers on the board with a 42-yard touchdown run. Owens scored again on the next drive to give Albert Lea a 15-12 lead after a successful two-point conversion run.

On the ensuing kickoff, senior Carter Simon recovered a fumble in Wingers territory to give the Tigers good field position, which they used to score a third unanswered touchdown. This time, senior Cole Wentzel marched in for the score with a 1-yard run. 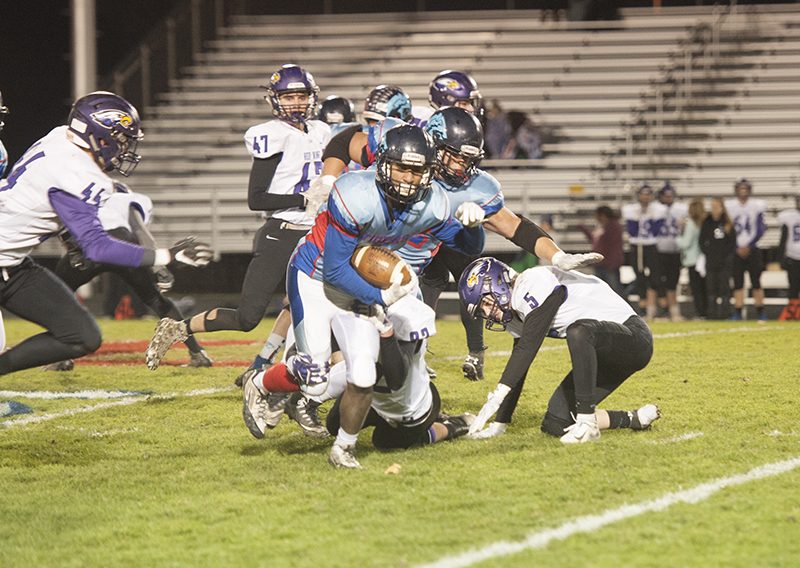 Albert Lea junior JJ Mucha-Owens fights for extra yards Tuesday night at home. The Tigers won the game to advance into the second round of the section playoffs, where they will meet up with Winona. – Tyler Julson/Albert Lea Tribune

Albert Lea wasn’t done yet, however, as senior Ian Ball recovered the third Red Wing fumble of the game with two minutes left in the first half. The turnover set up a 26-yard designed rush for junior quarterback Logan Howe into the endzone.

With little time left in the half, Owens intercepted a Wingers pass and returned it to the two-yard line, setting up a 2-yard Wentzel touchdown and put the Tigers up 36-12 late in the half.

After getting the ball back in good field position, the Tigers went to the locker rooms with a 39-12 lead, after senior Izzy Cabezas hit a field goal to give the Tigers their 39th point since the eight-minute mark of the second quarter.

The Tigers continued their domination, starting the second half with a 10-yard reception from Howe to Simon on the first offensive possession. Simon came up big on the defensive side of the ball, as well, intercepting a Wingers pass and returning it 65 yards for another Tigers touchdown.

Red Wing scored late in the third quarter and on the final play of the game to cut into the lead, but the game was already well out of hand by halftime as the Tigers sent Hammer Complex out on a high note.

Head coach Corey Black said the the number of turnovers was a key part of Tuesday night’s win. The Tigers forced five turnovers against the Wingers, four of which came in the first half.

“The big thing for us tonight was turnovers,” said head coach Corey Black. “We didn’t turn it over once and that was big. The turnovers gave us a short field and allowed us to get a spark when we needed one. That first quarter we were really flat and we needed those big plays to get the momentum going in our favor.”

Albert Lea improves to 2-7 on the season and will play again Saturday when they travel to Winona to take on the Winhawks.

“We can play with anybody and we’ve shown that the entire season,” Black said. “When we control the game and execute our game plan, we can hang in with anybody else. We’ve had leads late in ball games against very good teams and were looking for one more opportunity like that and hopefully this time we can hang on.”