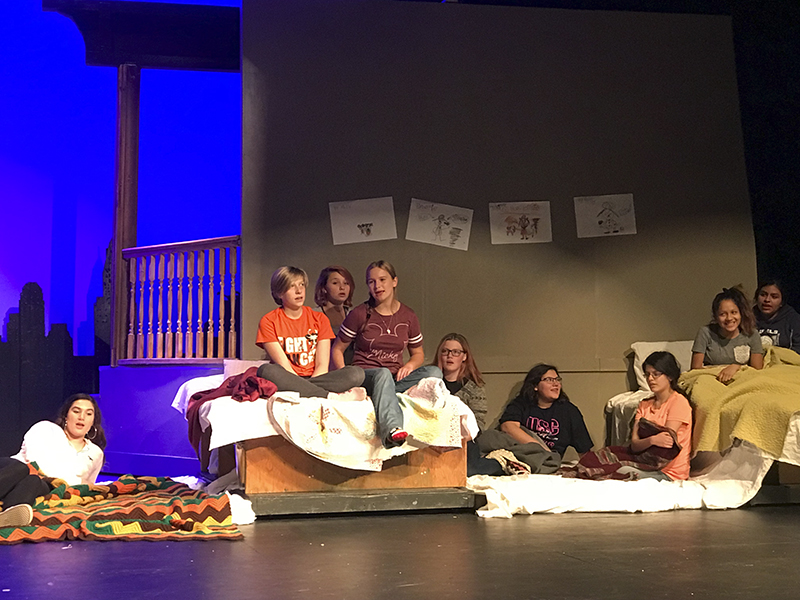 During a scene in the orphanage, the cast of “Annie Jr.” sings “Maybe,” the first song of the production. - Kelly Wassenberg/Albert Lea Tribune

WELLS — The United South Central auditorium will host a night of firsts Nov. 9.

Kirstyn Wegner will make her directorial debut, following in the footsteps of her father, Clay Miller; and ninth-grader Merideth Klingbeil will perform her first lead role as everyone’s favorite orphan, Annie.

“I was approached,” Wegner said of taking over as the drama director for USC, a position her father had filled for the last 33 years. “And I was a little hesitant to take it on, because Dad left such huge shoes to fill. ”

Reasons for her hesitancy included the workload and the time commitment one makes when taking on directing a play.

“It’s a huge time commitment, it really is,” Wegner said. “I don’t know how he managed to work full time and do this, which was probably another 40 hours a week, honestly, the way he did it.”

She said she has a “We’re done at 8:30 rule,” whether they’re done or not. Her father went until he was satisfied. She even remembers cast members inadvertently setting off the school’s security system because practice ran so late.

Wegner’s schedule is based on the needs of her youngest cast member, Nadia, who is her daughter and helped inspire Wegner to choose “Annie Jr.,” a slightly abbreviated adaptation of “Annie,” as her first play. 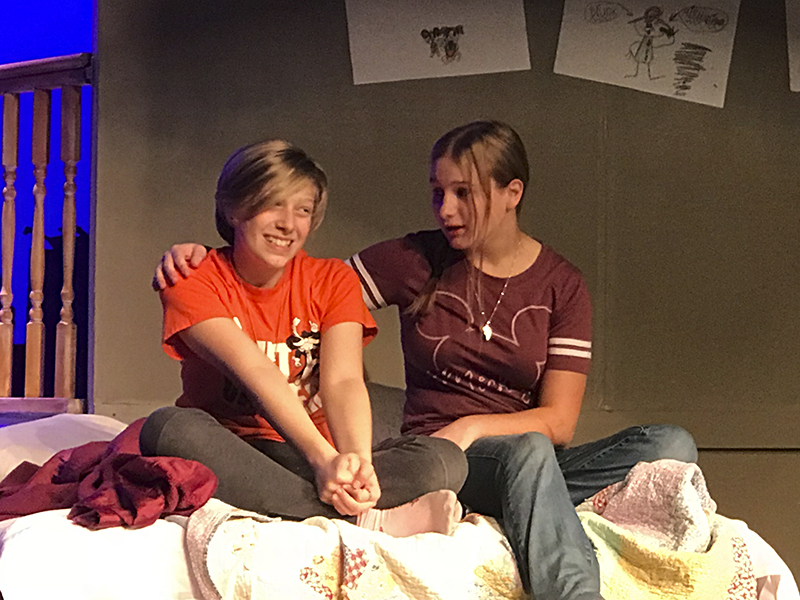 Liz Stern, who plays the role of Molly, is comforted by Merideth Klingbeil, who plays the lead role in “Annie Jr.” – Kelly Wassenberg/Albert Lea Tribune

“Part of the reason I wanted to do it is because adoption is so personal to me,” Wegner said. Nadia came into Wegner’s life as a foster child when she was in first grade. Now a fourth-grader, Nadia has been formally adopted into the Wegner family.

“It’s the same story, just a shorter version,” Wenger said of “Annie Jr.”  “(The writers) found ways to shave minutes off without sacrificing the story line or the things you know and love about ‘Annie.’”

Cast members include a real-life brother and sister — who are playing the roles of brother and sister on stage in the portrayal of Miss Hannigan and Rooster — and the role of Daddy Warbucks was given to someone who was originally assigned to lighting.

“I pulled our light operator out of the booth to play Daddy Warbucks,” she said. “He was just at auditions kind of humming along, and I needed somebody to read opposite of another person when they were auditioning.” After being asked if he could sing, Connor Ehlert got the part.

While the journey so far has been a little bumpy, Wegner has a great team to help her along the way, including Miller, who stepped up as set director; Ben Dundas, the play’s technical director; and costume designers Kay Stern and Denise Hassing.

“I feel like I have really been supported by the community, and a lot of parents have been stepping up,” Wegner said.

A pre-show event, An Evening with the Orphans, is scheduled for 6:30 p.m. Nov. 3 at The Bean in Wells. Wegner said there will be a meet-and-greet with the cast, a small photo booth area, a drawing for two free tickets to the show, a couple songs from the show will be sung and the audience will be invited to do a sing-a-long with them. There will also be cookies, beverages and a special appearance by canine cast member Beefy Kendall, who plays Sandy. That event is free to the public.